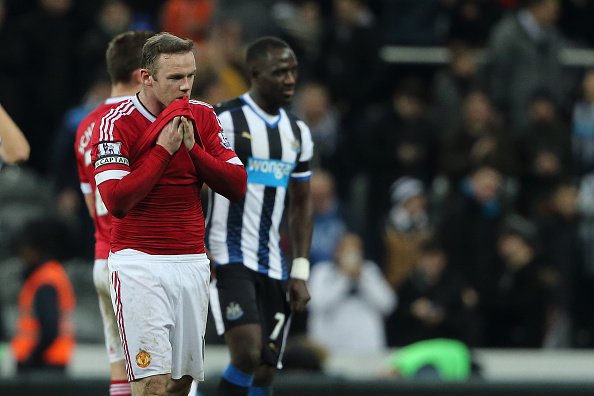 Manchester United dropped to sixth in the Premier League table and were left to settle for a 3-3 draw at Newcastle United in a pulsating thriller.

West Ham came from behind to win 3-1 against Bournemouth to move into the Premier League’s top five on Tuesday.

Aston Villa registered their first victory after 20th attempt, beating Crystal Palace 1-0, and were given a life-line in their battle to stay in the Premier League.

Wayne Hennessey, the Crystal Palace goalkeeper, fumbled Joleon Lescott’s header over the line to secure Aston Villa’s first win since the opening day of the season.

Enner Valencia scored twice, as the Hammers bounced back from a goal down to take full three points from the match.

A 90th-minute screamer from Paul Dummett clinched Newcastle a point at St James’ Park, after Wayne Rooney put the visitors ahead with a finely taken brace. 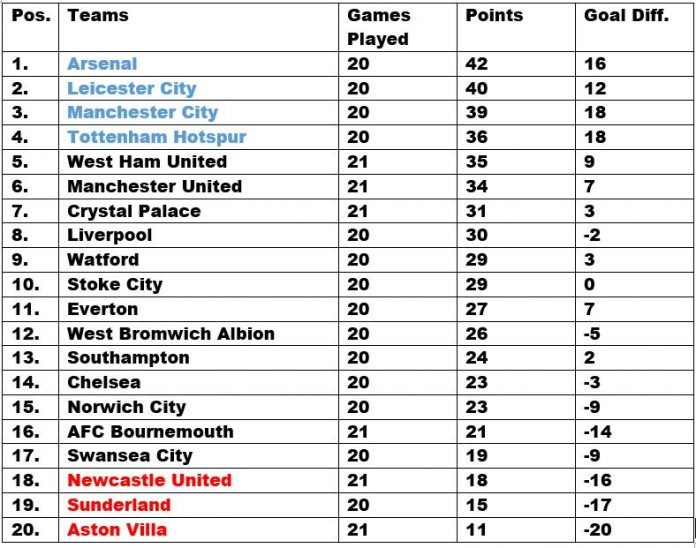 Louis van Gaal made a bold admission in the presser on Monday that he gets bored sometimes with United’s unattractive style of football.

United fans were habituated with an attacking brand of football under Sir Alex Ferguson, and such a drastic change in the playing style has left the fans frustrated.

Under the Dutchman, United have developed an uncanny habit of playing a similar style of football against all oppositions – one would struggle to spot any difference between United’s approach against a big club like Manchester City, or likewise against a lower league club like Sheffield United.

His methods are simple – tight organisation at the back, more possession in the midfield, and eliminate the risk-factor from the game.

Prior to the Newcastle game, United had conceded only 17 goals in the league, boasting the second best defence in 2015-16 behind Tottenham (16). It’s on the attacking front, where they have faced huge problems, especially in the creative department.

Probably for the first time this season United tried to play an attacking brand of football at St James’ Park, and while the results didn’t go in their favour, the manager seems to have won the hearts of the United fans.

United showed more fervour and passion going forward. They were fast and furious and produced some outstanding football at times, resulting in enough chances being created.

That’s a fantastic goal. Amazing what can happen when you attack with pace and pass the ball forward.

Wayne Rooney returned to his old best and produced a virtuoso performance for the Red Devils. The United skipper has been involved in most of their attacks, and has now scored 4 goals in his last 3 appearances.

United thought to have sealed the game after Rooney put them in front in the 80th min, but Dummett had the last word, to eclipse that effort with a phenomenal strike of his own.

It is often said that LvG abandoned his attacking style at Old Trafford, after United lost 5-3 against Leicester City last season. In another instance, United conceded four goals against MK Dons while trying to be more cavalier in their approach.

Dummett’s strike has put a dagger into LvG’s heart, into his psyche that such is the consequence one has to pay for being too adventurous.

Payet adds a new dimension to the Premier League

When he is on song, there are few players in the Premier League that are as good as Dimitri Payet. He is a pure joy to watch. What a singing he has turned out to be for manager Slaven Bilic at West Ham.

Harry After broke the deadlock with a long range strike, but West Ham equalised through Payet, who scored from a wonderful curling free-kick.

Payed displayed some magical dribbling and sets up the pass for Valencia, who slotted home as West Ham clinched a 2-1 lead.

Bournemouth enjoyed a good spell in December, where they lost only once in their five Premier League games, winning three of them. However, they are yet to win in January, although Eddie Howe will be looking to turn things around when they face Norwich and Sunderland in their next two matches.