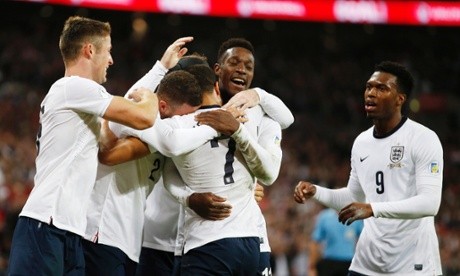 England are one win away from registering a place in the 2014 FIFA World Cup in Brazil as the Three Lions take on Poland for the final qualifiers on Tuesday evening. The English side will have a home advantage as the fixture will be held at the famous Wembley Stadium.

The hosts are unbeaten in the group stages and sit on top of Group H with five wins and four draws. England are leading the table with 18 points from nine games while trailing second place Ukraine by a point.

Hodgson would be looking to avoid defeat at Wembley as a point against Poland would be enough to see the Three Lions seal a berth for next summer’s World Cup. A draw on Tuesday against Poland and a victory for Ukraine over San Marino would see England take the second place and feature in Play-off, scheduled for next month.

England registered a 4-1 comfortable win over Montenegro in the previous fxiruer. Manchester United’s Wayne Rooney, Tottenham Hotspur star Andros Townsend and Liverpool striker Daniel Sturridge were all on the score sheet for the hosts.

Meanwhile, Poland have managed just three wins and two losses from the nine games played in the World Cup qualifiers. In addition to this, the central European side had four draws and their mixed results have seen them sit fourth in Group H with 13 points.

Poland lost their last fixture 1-0 to Ukraine and with the latest defeat, their hope of making to Brazil for next summer’s World Cup has also ended. Andriy Yarmolenko’s strike on 64th minute saw the four way battle for top two spot in Group H being reduced to three teams, England, Ukraine and Montenegro.

ITV 1 and UTV will provide the coverage between England and Poland in the UK. Play starts at 20:00 BST.