Fabio Capello has to sit through a lot of football matches before he decides who to pick for England. But the Italian manager could save himself a lot of trouble if he just played the Soccerlens Fantasy Football Game instead. I’ve looked at the stats, and picked an England team according to which English players have averaged the most points per game during the first three weeks of the Soccerlens Fantasy Football Game.

Couple of surprises there. I doubt Craig Gardner would make most people’s England team for the games against Bulgaria and Switzerland, I’m pretty sure most would prefer to see Rio Ferdinand in the team rather than his younger brother and I doubt many fans outside Chelsea would select Ashley Cole as England captain. Micah Richards actually scored higher than Luke Young, but misses out because I can’t pick more than two players from any one team. At least Capello doesn’t have that problem. But I say this still looks a pretty strong team. Definitely capable of beating Bulgaria at Wembley. 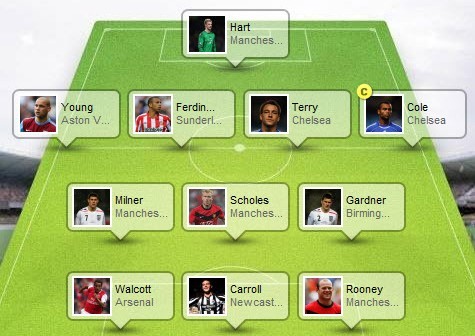 The Soccerlens All-Stars team played at the Silver level last week and won a tasty $25. If you think you can do better – talking to you Fabio – then sign up for the Soccerlens Fantasy Football Game and pick your team now.