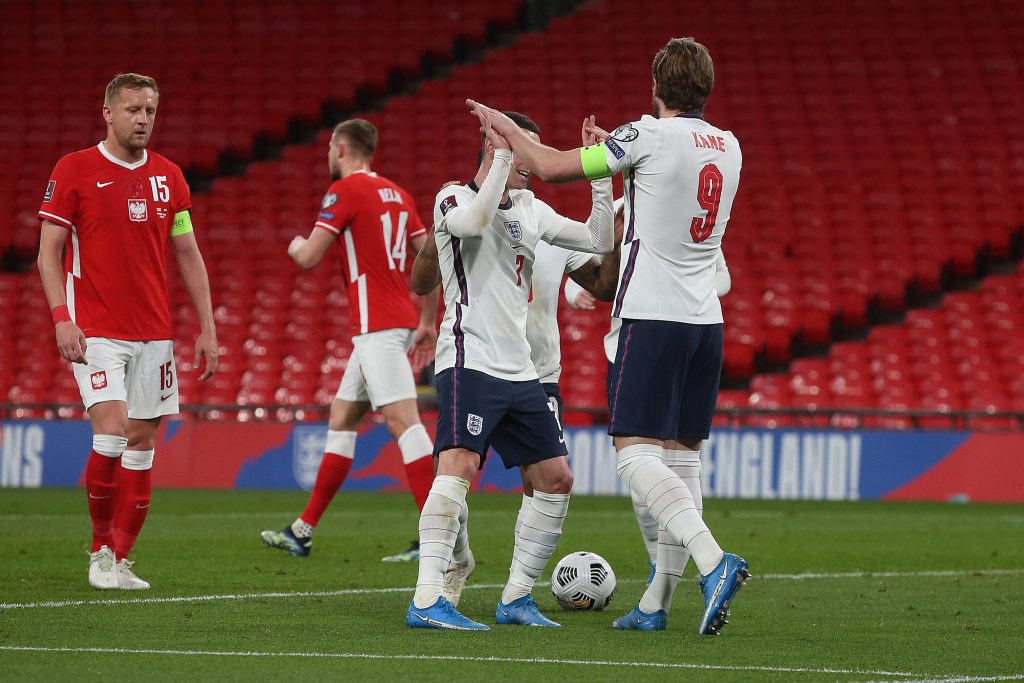 Two set-pieces helped England to a 2-1 win over Poland at Wembley, securing a third 2022 World Cup qualification victory in a week to round off the March internationals.

Harry Maguire’s late strike sealed the three points after Harry Kane’s first-half penalty had been cancelled out by Jakub Moder after the break.

This was the sternest test yet in qualification for England. Manager Gareth Southgate made just one change to his side from Sunday’s 2-0 win away in Albania as Ben Chilwell returned to replace Luke Shaw in the left-back role.

Southgate opted to keep two holding midfielders – Declan Rice and Kalvin Phillips – in the starting 11, and the Three Lions lined up as follows in their all-white home kit:

Before the game, it was announced that midfielder James Ward-Prowse had left the camp early and headed back to Southampton due to fitness issues ahead of this weekend’s Premier League action.

His club teammate Jan Bednarek was amongst those in Poland’s side at Wembley, which was much changed due to absentees including star man Robert Lewandowski through a knee injury. Leeds United’s Mateusz Klich was also missing as he has tested positive for COVID-19.

Head Coach Paulo Sousa – who only took over in January – named this starting 11 with four changes from a 3-0 victory against Andorra at the weekend:

As the game got underway, it was one of few chances. England had Poland on the back foot but couldn’t carve out opportunities for themselves, much like against Albania on Sunday.

Mason Mount and Chilwell linked up well, with the latter able to dink the ball into the area, but the execution wasn’t great, and Phil Foden was unable to meet the ball in the air cleanly as it glanced off the top of his head and away from danger.

A scrappy contest ensued, but Southgate’s side were finding some joy down the left-hand side, and it was to be from this route that the opening goal of the evening would come.

Raheem Sterling drove into the box and was brought down by Barnsley’s Michał Helik, referee Björn Kuipers awarding a penalty to the hosts.

Captain Kane stepped up and converted past former Arsenal goalkeeper Wojciech Szczęsny to put England into the lead. In the process, Kane broke a record and became the player to have scored the most penalties for his nation, now with a conversion rate of 10 from 12.

This advantage could have been doubled ten minutes later as Sterling once more broke through the Polish defensive line and was presented with an opportunity to either shoot or square the ball across the box to Mount, who was waiting to tap it in.

Ultimately, he did neither and Szczęsny came away with the ball in his grasp. Similarly, Sterling made another run into the box soon after but was this time successfully challenged by the final Polish defender as he was about to unleash a shot at goal.

Szczęsny was tested on one more occasion before the half-time whistle and produced a good save to keep the scoreline at 1-0 heading into the break.

Kane received the ball on the edge of the box with a lay-off from Foden and struck goalwards, but the keeper got down well to push the ball away.

Half-time came with the visitors yet to register a shot at Nick Pope’s goal. The introduction of forward Arkadiusz Milik off the bench wasn’t all that surprising, and it didn’t take him long to become involved in the game as he received a yellow card within a minute for a late challenge.

Foden then fired a free-kick over the top of the net from an awkward angle on the left-wing before things started to unravel for Southgate’s side.

A warning was given when John Stones and Pope had a mix-up at the back which they got away with when the keeper was fouled by a Polish forward, but the lesson wasn’t learned and with their first shot on target soon after, Sousa’s side were level.

Playing out from the back, a poor touch by Stones – who has been magnificent this season for club side Manchester City – was pounced upon by Jakub Moder on the edge of the England area, and the defender didn’t have time to react before a flash of the attacker’s red shirt was past him.

Moder – a Brighton and Hove Albion player at club level – played a one-two with substitute Milik before firing into the back of the net past Pope, who had little chance of saving it.

The goal meant that seven games into his international career, keeper Pope conceded for the first time, and it meant that the home side had to push for a winner to keep their 100% record in qualification going.

From then onwards, Poland seemed happy enough to take the draw and made the game as awkward as they could for England, in the most positive sense, as they frustrated the Three Lions with ball retention.

After all, they had dropped points with a 3-3 draw against Hungary on the opening matchday of the group stage, so any point gained at Wembley would be massive in their own hunt to top the table.

Kane was fortunate to escape punishment for a late challenge on Szczęsny, albeit he only had eyes for the ball.

England were again struggling for goalscoring opportunities, their best effort for some time a blocked free-kick from close-range by Foden.

That was until five minutes from time when Mount’s shot was deflected behind for a corner off the back of a Polish defender.

Phillips swung a good delivery to the back post from the left-hand side, and Stones rose highest to nod back across the box and atone for his earlier error.

Defensive partner Maguire met the ball with a swinging half-volley to power the ball into the back of the Poland net and salvage the game for Southgate’s men on what had been a tricky evening.

In the closing stages, game management came into play as Dominic Calvert-Lewin and Jesse Lingard both entered the pitch as substitutes to try and keep the ball in the corner.

Poland did manage to break forward on a couple of occasions but didn’t trouble Pope.

Rafał Augustyniak – himself a second-half substitute – fired a volley over the crossbar with the last kick of the game. The referee blew the full-time whistle to finalise a third victory in six days for the Three Lions.

With nine points from a possible nine, they have made a good start to World Cup qualification, though the performances at times have left questions to be answered.

Having now played their last competitive game before the delayed 2020 European Championships starts in 72 days, Southgate will name his 23-man squad before we next see England back in action.

They are scheduled to play friendlies against both Austria and Romania in June as warm-up games for the Euros, though details of these games are still to be confirmed.