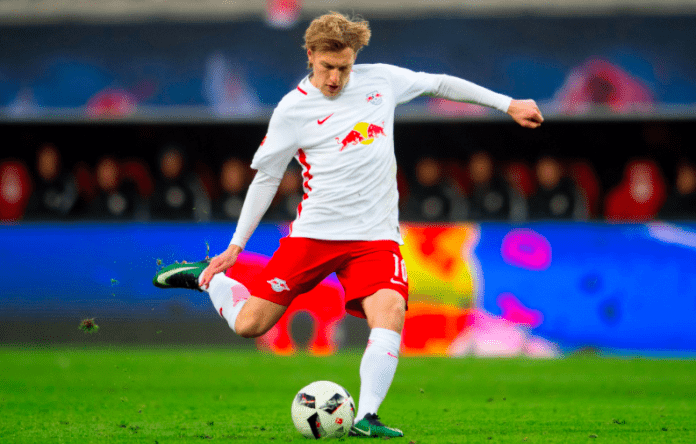 Emil Forsberg is being chased by Liverpool, suggest an array of reports.

“I will not confirm any names, but a number of big clubs have made enquiries after his first great half of the season”

This is very typical of agents who try to earn their clients big moves and these comments shouldn’t be viewed very seriously, but Liverpool have been linked with the Swede in the summer as well, making this more interesting.

Who is Emil Forsberg?

Forsberg started his career with his home-town team in 2009, GIF Sundsvall, before moving to Swedish big names Malmö FF in 2013. In his time with the club, he made 57 appearances and scored 19 goals. He won two top-flight titles, but more noteworthy was him earning the “Sweden’s Midfielder of the Year” award. It was little surprise that his country came calling, and in 2014, Forsberg won his first senior cap in a friendly against Moldova in January 2014.

His stock was constantly rising, aided further by the call to the national side. In January 2015, he left Malmö after two successful years to join Germany’s second tier side, RB Leipzig. He featured 14 times in the latter stages of the season and was instrumental in the unit’s promotion-winning campaign in 2015/16, scoring eight goals. Leipzig’s performances in the top flight have been phenomenal, and the Swedish playmaker has been instrumental for RB Leipzig, a team that has taken Germany by storm. His five goals and eight assists have been crucial to the Bundesliga outfit’s stunning form this season.

The 25-year-old likes to drift in from his position, mostly on the left flank, to the centre and sometimes even on the right to overload the area. He is confident on the ball, and his decision making is exquisite. He can play anywhere in attack behind the striker, right behind in the #10 position, as well as out wide on the wings. His propensity to find the key pass makes him a tremendous asset, especially when he does the same from out wide, an aspect that distinguishes him from other wingers. He is quick and agile, which allows him to move forward rapidly and beat players with impressive ease.

Should Liverpool go for him?

Forsberg is an impressive candidate and one that can certainly add quality to most Premier League sides. Naturally, the links to Liverpool have been received well by the fans. With Sadio Mané off to the Africa Cup of Nations, and injuries that halted Philippe Coutinho and Daniel Sturridge’s campaigns have shown Liverpool’s lack of quality in depth. Adding Fosberg would amend that.

Liverpool have emerged as title contenders this season, and for that to happen, the Reds will need to be sharp for the remainder of the campaign. While the lack of European football bodes well for the side, Liverpool have an infamous history of capitulating at crucial moments. Hence, adding an attacker with Forsberg’s impressive quality would boost the squad tremendously.

His versatility would add to the team tremendously. Like Adam Lallana, Forsberg could fit in anywhere along Klopp’s frontline and drop into the midfield three if need be.