Porto defender Eliaquim Mangala, who is one of the prime targets of Manchester United and Manchester City, prefers a move to Chelsea, according to reports from France.

After spending three successful seasons at Porto, the 23-year-old defender is certain to leave the club this summer, with the Portuguese outfit already looking for a replacement. 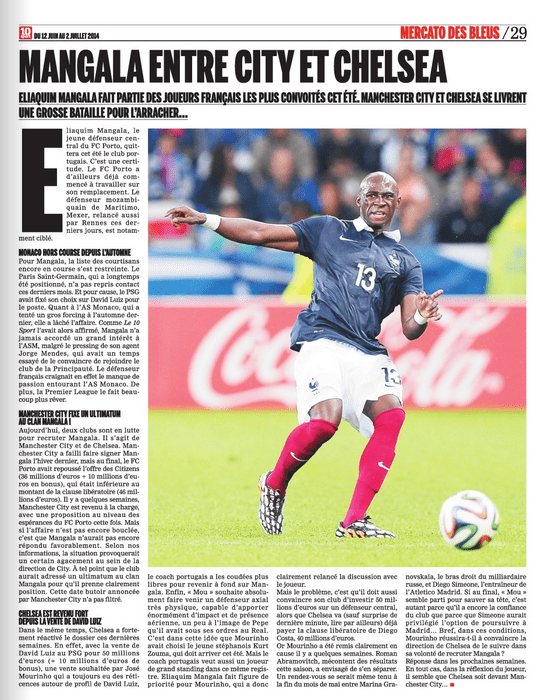 Manchester City have tried to sign him before but the Premier League Champions were reluctant to match his buy-out clause, although they now seem willing to do. The problem is Mangala hasn’t given any definite answer yet and City have given him an unreported deadline to inform them before they move on.

City see Mangala as an ideal candidate to partner skipper Vincent Kompany but the French defender wants to join a club of greater stature, like Chelsea and Man Utd.

The Times reported earlier this month that Manchester United new boss Louis van Gaal harbours concern over the player’s temperament and has shifted his focus elsewhere, with Borussia Dortmund’s Mats Hummels is thought to be his primary target.

That leaves Chelsea in the best position to lure the defender to Stamford Bridge in the summer. After selling David Luiz to PSG, Mourinho is looking for a centre-back who’s very imposing and strong physically and also experienced enough to lead the back-line.

Furthermore, Mourinho shares a strong relationship with Jorge Mendes, who is the agent of the player, which enhances Chelsea’s chances of signing Mangala. The only problem is to convince the club hierarchies to trigger his release clause, especially after spending heavily on Costa and Fabregas.

Should Chelsea trigger the release clause of Mangala? Share your views…