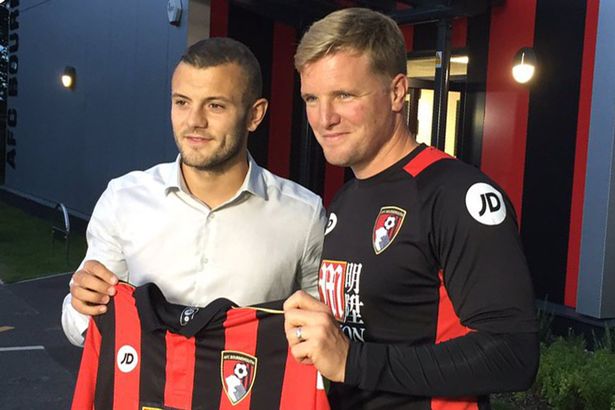 Arsenal midfielder, Jack Wilshere, has been enjoying a fruitful time during his loan spell at Bournemouth.

Wilshere, who graduated from Arsenal’s youth academy, has struggled to keep himself fit in recent years with a series of injuries hampering his progress.

He was sent on loan to Bournemouth last summer to get regular games under his belt. For the first time in many years, he has made over 20 appearances in the Premier League, managing over 1600 minutes on the pitch.

Wilshere has been a pillar of strength in the middle of the park for the Cherries. And Eddie Howe, the Bournemouth manager, wants him to be at the club beyond the summer.

The England midfielder will return to the Emirates after the end of the season once his loan spell expires. Howe says that he hasn’t spoken with Wilshere yet about his future, and adds that the decision completely rests with the 25-year-old.

Howe said, as quoted by the Daily Star:

We couldn’t think more of the player, so if there was a chance for us to maintain our relationship beyond this season we would certainly look at that.

But the loan was very much put in place for Jack to try to play football, stay fit, express himself on a really good platform, then make his own decision on where he goes next.

I haven’t spoken to him about his future yet. We are immersed in the season and trying to fight for every point we can get. Any talk about the future is for the summer.

Arsenal are stocked with quality central midfielders in the side, and they would become a strong force with a fully fit Wilshere back in the side again.

Since making his debut in 2008, Wilshere has made 105 Premier League appearances for the Gunners. He has a contract with Arsenal till 2018, and it remains to be seen what the future holds for him.