Manchester United and Liverpool target and dynamic Roma midfielder Miralem Pjanic is uncertain on his future in Italy according to Tutto Mercato Web.

The 24 year old who has had a sizzling season at Rome claims, “I feel good here, but still do not know what will happen.”

The Bosnian has scored 5 goals and grabbed 6 assists for his club this season and his dazzling contributions in midfield has attracted the biggest of clubs all across Europe. It is his creative imagination in the middle of the park which has seen him involved in 58 key passes this season leading to his side’s goals. 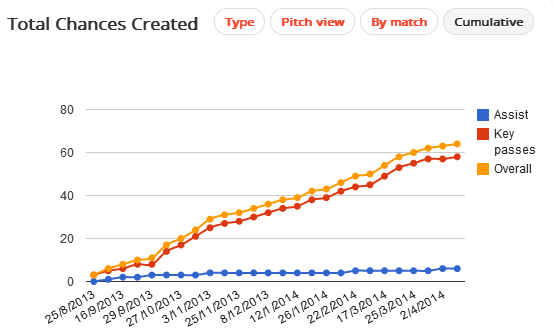 Manchester United had sent scouts in the weekend to watch Pjanic as Roma beat Fiorentina by the thinnest of margins to continue a brilliant season for the Giallorossi under Rudi Garcia. The Red Devils have had a dismal campaign are willing to spend in the summer to bring a midfielder who can pull the strings in the middle of the park.

Jonathan Johnson, Ligue 1 & French football journalist had earlier tweeted that Italian newspaper Gazzetta Dello Sport have reported that Roma might sell their prized asset whose contract is due to expire in the summer of 2015.

Gazzetta dello Sport: Roma could also consider sale of Miralem Pjanic (PSG target) this summer. Contract is due to expire in 2015. #PSG #ASR

It is believed that French Ligue One Champions Paris St Germain are ready to pay over the hill to land the Pjanic at Parc De Princes in the summer. Liverpool were thought to be interested as covered the story last month.

With the Financial Fair Play coming into effect, some reports have otherwise stated that Roma are keen to land Porto striker Jackson Martinez in the summer and might sacrifice Pjanic in the process.

David Amoyal, head of Football transfer and Serie A expert also feels Pjanic can leave even if he signs a contract extension.