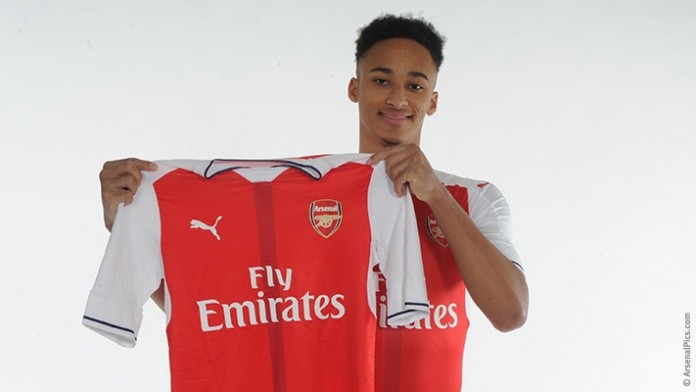 Arsenal have completed the signing of young left-back, Cohen Bramall, from Hednesford Town. The London club have confirmed the news on their official website.

The 20-year-old defender is an exciting talent, and he will join up with Steve Gatting in Arsenal’s U-23 squad.

Bramall had a trial at Arsenal in December and since then he has been training with the Gunners first team.

The young-left back will sign a two-and-a-half year deal with the Premier League giants, and he is expected to develop gradually from the youth squad.

Sky Sports reported that Hednesford are set to receive around £40,000 for the 20-year-old.

Bramall recently revealed that he has received words of encouragement from none other than Arsène Wenger after a training session.

“He came up to me after the session and it was literally a “hi, nice to meet you’ and he told me he liked how I play,” said the youngster, in a recent interview.

Arsenal are not expected to do any major transfers in the January transfer window, although recent reports suggest that Wenger is probably looking to sign a striker. Arsenal made a £56m offer for Torino striker, Andrea Belotti, but it has been rejected by the Serie A club.

Wenger’s major concern, however, at this moment is to get the contracts of key players sorted out. Olivier Giroud has recently revealed that he is close to signing a new contract, but Arsenal have yet to tie down Alexis Sánchez and Mesut Özil on long term deals.