Don’t be a mug and stick with Spurs. Know what I mean ‘Arry? 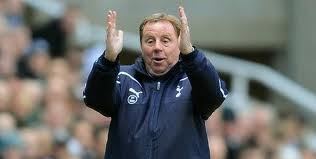 So it’s “arrivederci” to Mr Capello and with that once again The FA are in search of fresh man with fresh ideas to manage the England football team. The now infamous “impossible job” is waiting ominously to be filled by a brave managerial soul and the national media appear to be in no doubt as to whom that man should be, yes it’s the half human half bloodhound hybrid, Harry Redknapp.

Redknapp, who was on Wednesday cleared of tax evasion at Southwark Crown Court, must have been relishing the thought of a quiet night in away from the intense media scrutiny which had been constant over the previous two weeks. Alas, he was to have no such luck as the media spotlight quickly beamed back on him, albeit for more positive reasons, following the resignation of Fabio Capello.

Seemingly the whole nation was immediately buzzing with talk of what Capello’s departure meant for the national team just four months before Euro 2012. The question constantly nagging me however was why? Why all the hysteria?

International football has become a rather underwhelming and dreary pursuit in the face of ever growing interest in the now epically hyped English Premier League and heavily revered Uefa Champions League.

How depressing the feeling has become when late on a mid-week afternoon as your attention turns towards the weekends domestic action you realise it’s an international break, a feeling only exacerbated further when the break is merely for a friendly.

The international breaks are often uninspiring, dull, an unwelcome distraction. It is becoming ever more commonplace that following a dispiriting international break the nation’s mood is once again lifted by a rip-roaring weekend of domestic football.

Success at International level was once considered the pinnacle of football achievement with the feats of Pele, Maradonna, Beckenbaur serving to immortalise them and the World Cup itself in the annals of football history. The former of these three football greats responded to Lionel Messi‟s third successive Ballon d‟Or by claiming the argentine magician cannot be considered a true great until he has achieved success on the International level.

The retort to this is straightforward; Messi has three Champions League winners medals, a competition which has undoubtedly superseded the World Cup as the pinnacle of excellence and achievement in the modern game. This is a fact which can be highlighted simply by identifying the two dominant forces in each spheres of the game. In the domestic game the superior outfit is clearly Barcelona, in international football it is Barcelona Lite, most commonly known as Spain……without Lionel Messi.

This is a major reason why Redknapp should stay put. He is already dining at football’s top table with an almost tangible chance of sitting at the head of it, at least domestically, providing he can find a way past the two Manchester’s and without the added pressure of a nations unrealistic expectations.

This is more than can be said for his chances with England, a team that despite a light sprinkling of exceptional players, still lacks the ball retaining ability, technical prowess and mental strength to compete with the offerings of Spain, Germany and Holland.  At international level Harry’s literally stuck with what he’s got and can no longer rely on his eye for talent and famous wheeler dealing that has helped him further Tottenham’s cause during his tenure.

The question Redknapp must ask himself is “can I actually be successful as England manager?” Obviously that depends on what is considered success but if the past is anything to go by that consideration will be seriously out of kilter with what is actually achievable and we all know how the story goes from there.

Contrastingly, at Tottenham he is potentially on the verge of something really special this season or the next with a couple of astute additions to a squad. A squad which, as Daniel Levy has already proved last summer with his resistance to the sale of Luka Modric, will not be dismantled, especially with Champions League football in the bag.

Compounding all this is the very reason why we call the national the role the “impossible job,” the tabloid media. The England team has become less a body that regularly occupies football fans minds and more some form of toy for the national newspapers, with the football manager playing the most vulnerable of pawns in their often frenzied game.

Admittedly, Harry has them firmly on his side with pretty much unanimous support across the nations print rooms, but of course how quick this can change; Kevin Keegan anyone?

Following the failures of Steve McLaren the order of the day became experience, tactical knowledge, authoritarianism in order to get the best out of our over indulged “Golden Generation‟ and up until June 2010 Capello delivered this emphatically and was considered a shrewd appointment even at £6 million pounds a year.

Four disappointing games later and all that went out the window. His tactics were a problem, his grasp of English was a problem, his nationality, his wages, his choice of swimwear (who can forget the Speedos) you name it if it involved Capello it was a problem and remained a problem even after another successful qualifying campaign.

Accordingly, despite his managerial achievements still remaining relatively modest and indeed his own reservations regarding lack of daily contact with players, it is now the attributes that Redknapp possess which are in vogue.

But  its depressingly inevitable that the vulnerability of the role will eventually render these attributes unsuitable and ineffective and yet again we will be back where we are now, after all how can one succeed in the impossible job.

Commenting from a significant distant I think he‟d be mad to swap White Hart Lane for Wembley Way but nevertheless, it is highly likely that the lure of leading his nation will be, for Harry, a proud Englishmen, understandably too much to resist. I just hope he fully realises the position and potential he is walking away from and more importantly just exactly what he is walking into.