Does Nikica Jelavic have a future at Everton? 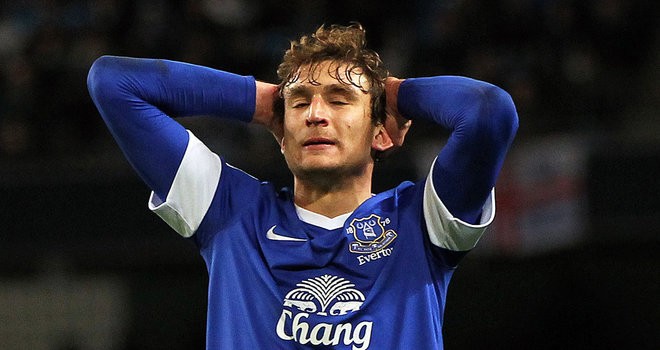 Croatian international striker Nikica Jelavic has had question marks over his future with Everton after a season to forget in the Premier League.

Upon his initial signing from Scottish Second Division side Rangers in the 2012 January transfer window, Jelavic netted nine goals in 13 league games during the second half of the 2011/12 season.

However, this season, Jelavic mustered only seven goals from 37 Premier League games, and subsequently found himself dropped from the starting line-up mid-way through the league campaign.

In his absence, Nigerian international Victor Anichebe shone for Everton, and kept Jelavic out of the starting XI on merit.

Under new manager Roberto Martinez, formerly of Wigan Athletic, Everton are said to be in the market for Wigan’s Ivorian striker Arouna Kone. His arrival could see the out-of-favour Evertonian move further down the pecking-order for the 2013/14 season.

However, Jelavic will be relieved to be playing under a new manager, as he can now start from a clean slate – which could potentially give him a chance to work himself back in favour at the club.

Since the end of January 2013, the Croat was deemed only good enough for brief cameos in 15 of the 18 remaining Premier League games – racking a meagre total of approximately 800 minutes from a possible 1620 under ex-Everton manager David Moyes.

With Everton reportedly in advanced talks with Kone, his arrival is deemed imminent. The sale of Jelavic could provide much-needed funding for extra signings. Something Martinez will be wary of.

Could Kone’s introduction to the side see Jelavic faced with a decision to leave the club? Or could Martinez incorporate all three strikers and keep them happy?