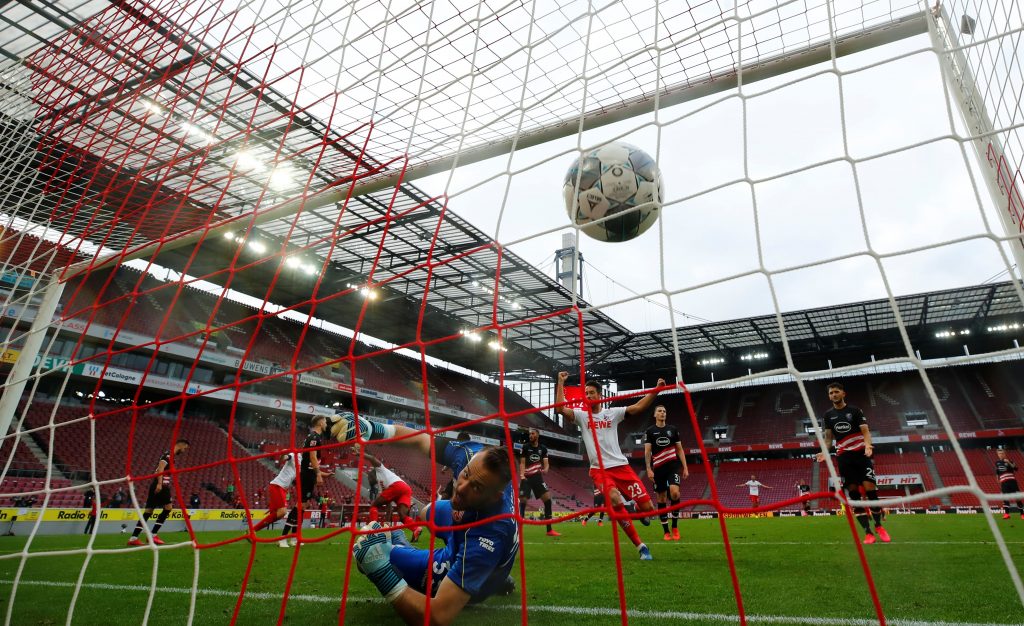 Köln hosted Düsseldorf for the Rhineland derby, with the visitors in dire need of points to keep their survival hopes alive. Köln had the chance to break into the top half of the Bundesliga table with 3 points.

It was an even first half. The home side started off well, but Fortuna were able to get a decent amount of chances. There were no clear-cut chances, though. Köln had the majority of the possession, but they couldn’t get anything to show for it.

The away side were able to steal in though, and a misplaced pass from Katterbach allowed Karaman to score, as his shot took a cruel deflection to steer clear of Horn.

The second half saw more of the same, but they still couldn’t create a major chance. That was, until Kainz drilled a low cross for Uth, who struck the post, drew a save and then was hacked down by Bodzek. But he failed to convert the resulting penalty, or the follow-up from Kastenmeier’s save.

Fortuna went up the other end and went and scored through Thommy, and doubled their advantage.

Köln pushed thereafter, and got their reward when Modeste headed a Drexler cross into the back of the net.

They completed the comeback in the 90th minute when Córdoba headed in yet another Drexler cross.

The derby ended 2-2, with Düsseldorf disappointed that they threw away 2 invaluable points for their relegation battle.

There was not much to speak of tactically, as the home side had more of the ball, but mainly in their own half. Fortuna relied on quick attacks, as Köln played long balls up to Córdoba, who worked very hard to create chances for his side.

After the missed penalty, they switched to a back 3, but were caught in transition as a ball across the defence to Thommy allowed him to score with a neat finish. But even thereafter, Köln relied on hopeful long balls, which Düsseldorf managed to repel nine times out of ten.

That was until they started going wide towards the end, as Drexler put in two crosses, and Modeste and Córdoba headed two goals in.

Karaman vs Leistner – Leistner managed to contain Karaman for the majority of the match, as he was solid in defence. But Karaman was able to get a couple of chances, one of which led to a goal as his shot took a deflection of none other than Leistner to send Horn the wrong way.

Timo Horn – He had a decent game, making saves when he had to. He couldn’t really do much about either of the two goals. 6.75.

Kingsley Ehizibue – Was good both defensively and going forward. Occasionally popped up with a cross from the right flank. 6.5.

Sebastiaan Bornauw – He was good defensively, and his distribution was decent too. 7.

Toni Leistner – He was an solid at the back. Won most of his challenges, and was confident on the ball as well. 7.25.

Noah Katterbach – He was not bad but his performance was dotted with loose passes, most notably when his misplaced pass led to the first goal. 4.5.

Ellyes Skhiri – Wasn’t too involved in the match until late on, but he grew into the match after the tactical change to a back three. 5.

Jonas Hector – He was solid in midfield, making challenges and picking out passes throughout the match. But he was largely uninvolved going forward. 5.5.

Florian Kainz – Had a decent game on the right-flank. Put in a couple of threatening crosses at times. Switched over to the opposite flank after the substitutions, where he was not too effective. 6.5.

Mark Uth – Yet another industrious performance from the local hero. Did very well to win the penalty, but made a mess of it and failed to score. 6.5.

Ismail Jakobs – Was a continuous menace due to his pace but his decision-making could have been better. Wasn’t able to create too many chances. 6.25.

Jhon Córdoba – Worked very hard up front as the target man, and did his best to string together attacks for his side. He got his reward with the late headed goal. 7.5.

Dominick Drexler – Played well in midfield since he came on. Got a brilliant assist after his first-time cross was headed home by another substitute, Modeste. Picked up yet another assist for Córdoba’s equaliser. 7.

Anthony Modeste – Tried to make things happen after he came on, as he challenged for crosses. His acrobatic efforts were nonthreatening, but his header was brilliant and deserving of a goal. 7.

Team: They were second best for 88 minutes, as their predictable strategy of sending balls forward for Córdoba was rather ineffective. But towards the end, with support from Modeste, it all started to work, and the two aforementioned strikers got a goal each, which helped their side absolute steal a point from this match. They still have a lot to improve on, but they showed great character to come back from a two goal deficit, especially after they were victims of a similar comeback from Mainz last weekend. 6.75.

Florian Kastenmeier – Made massive saves to deny Uth, first just before he won the penalty, and second from the penalty. Besides that he didn’t have to do much, as the two goals were simply unstoppable headers. 7.

Mathias Jørgensen – Had a decent game, but failed to prevent Modeste from heading and winning long balls. Barring that his match was error-less. 7.

André Hoffmann – Spent the whole match battling against Córdoba, and was able to keep him in check for 90 minutes, but allowed him to steal in and score late on. 7.5.

Niko Gießelmann – Had a decent game at the back. He did well to keep Kainz in check whenever he had to, and didn’t make too many mistakes. 7.25.

Gerd Zimmermann – Did very well to contain Jakobs. Had a decent game as he also supported the attacks down the right flank. 6.75.

Adam Bodzek – Had a decent game in midfield. He managed to prevent Uth from running all over his defence. Gave away a needless penalty but luckily it was saved. 6.5.

Alfredo Morales – Had a very good game in midfield, as he swept up the second balls when Córdoba hunted the long balls down. 7.25.

Erik Thommy – Worked very hard in attack. Threatened with his pace, and got a deserved goal with a classy finish to double Fortuna’s lead. His passing was great as well. Industrious performance from him overall. 8.25.

Kevin Stöger – Had a good game in midfield as he prevented Hector and Skhiri from getting too involved in the home team’s attacks. 7.

Steven Skrzybski – Had a decent match, as he tried to make things happen down the right. Got two crucial assists. 7.

Kenan Karaman – Worked very hard going forward. Had a couple of chances, and got a crucial goal towards the end of the first half. 7.25.

Jean Zimmer – He was decent since he came on, as he helped out defensively, but failed to have any impact in attack. 6.5.

Team: It was a very tough result for Düsseldorf. They looked on course to take away 3 invaluable points from this derby, and will be kicking themselves for allowing two late goals in the space of three minutes after having been the better side for almost 88 minutes. That’s the 9th time they have failed to win after going in front, and they have now dropped 17 points from winning positions. They desperately need to stop doing that. 7.

Köln jump Hertha to go into the top half of the Bundesliga table on goal difference after they stole a point with two late goals. They face Hoffenheim next, knowing that a win will take them above their rivals. They may even be able to push for the European places late on if they can start picking up a decent amount of points.

Fortuna, on the other hand, stay in 16th place, and they are 3 points behind Mainz who are directly above them. Their confidence will surely take a hit after they threw away points late on yet again, after being the better side in the match. They face another team in desperate need of points – Schalke who are winless in their last 9 games. They need to start holding on to positive results if they hope to survive the relegation battle.