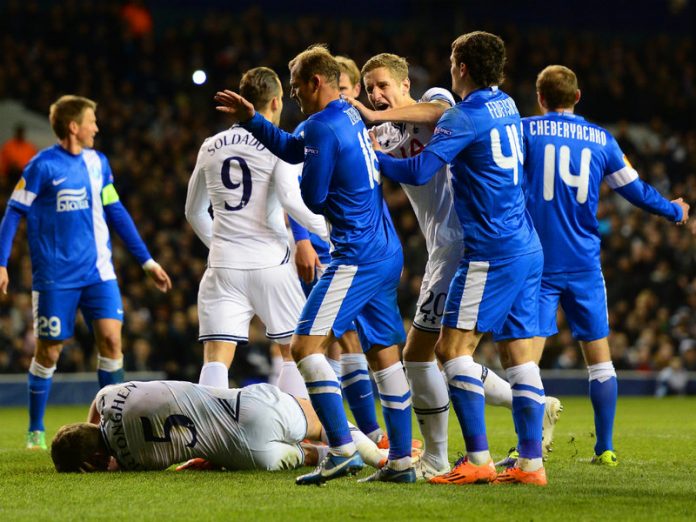 A controversial red card swings in Spurs’ favour to secure their place in the Europa League last 16, but what can be done to reduce seemingly unjust decision making?

Minutes into the second half and the Europa League game between Dnipro Dnipropetrovsk and Tottenham Hotspur is finally heating up, with Roman Zozulya putting one past Hugo Lloris to take the lead at White Hart Lane, doubling their aggregate and gaining the away goal. Christian Eriksen brought some life back to the home side but the equaliser was futile, until the 67th minute when Spurs were handed a much needed lifeline.

Preparing for a set piece, a clashing of heads occurred between Zozulya and Jan Vertonghen, prompting referee Antony Gautier to show the Ukrainian a red card. It took less than two minutes for Tottenham to make use of their one-man advantage as Adebayor put Eriksen’s low cross in the back of the net and three minutes later raced clear of the defence to poke another past Denys Boyko. Replays saw Vertonghen initiating contact with the Dnipro striker before falling to the ground with his head in his hands. As controversial as the overreaction is, there is no arguing the Gautier’s decision to dismiss Zozulya changed the entire game.

The merest of touches prompting a theatrical fall is something many football fans will be familiar with. One recent example being Ramires’ dive against West Brom, depriving the Baggies of a historic win at Stamford Bridge in the 94th minute. This was a dive that was so obvious on television that it promoted an apology from referee’s chief Mike Riley, on Andre Marriner’s behalf. Less than two months later and referee Martin Atkinson was not to be fooled by the Blues, as he awarded attacking midfielder ‘Oscar’ with a yellow card for simulation against Southampton.

Psychologists have been in the spotlight this week as Roy Hodgson revealed he has considered using a specialist to aid his players in their performance during penalty shoot-outs, but could they also be used for helping spot the players feigning injuries?

The role of a referee involves effective game management; maintaining discipline, split-second decision making and allowing the game to flow, but how can they be expected to do this when players are cheating and need to be dealt with appropriately? Psychologists have come up with a four-point guide of how to tell a real tumble from a simulation, these include clutching the body in places they haven’t been hit, taking an extra roll when they hit the ground, and continuing to take fully controlled strides after being tackled but before falling. The biggest giveaway is said to be when they hold up both arms in the air with open palms and legs bent at the knee, biomechanically these actions do not occur in a natural fall as instinctively arms either go down in an attempt to cushion the fall or out to the side for balance.

The environment referees work in is undoubtedly one of the toughest. The nature of the match itself can often create a highly pressurised situation, especially in derby games, or a promotion/relegation battle. On top of this, some hostile players (and fans) can also add to the stress incurred, leading to often questionable judgement and decisions made in error as a result.