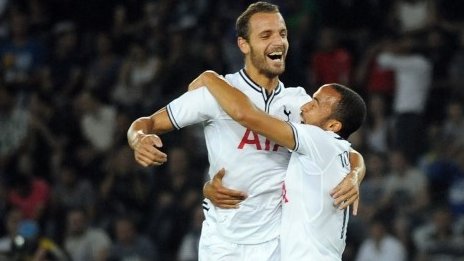 Andros Townsend put up his best performance in Spurs’ shirt so far and capped off a wonderful night for the North Londoners with vital contribution, where he was directly involved in the first three goals. 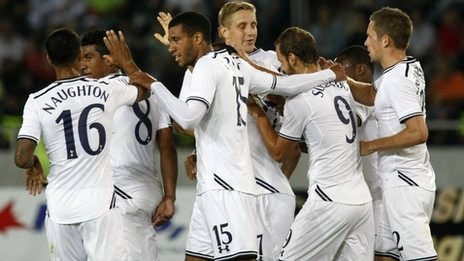 Andre Villas-Boas made four changes to the team that started against Crystal Palace last Sunday. Roberto Soldado and Paulinho kept their place, while Gareth Bale was absent due to injury.

The first chance of the match fell to the home side, when Elguja Grigalashvili cantered down the right hand side, cutting inside and fired a shot that was deflected over the top.

It didn’t take long for the visitors to take the lead. Spurs made the best use of a counter-attack from Dinamo’s corner, Paulinho won the ball with a block right outside the box and played it onto the path of Andros Townsend who ran from inside his own half and fired a left-footed 20-yard scorcher.

Spurs were creating better opportunities as they controlled the possession in the midfield. Capoue and Paulinho linked up well in the midfield while Rose was providing the sufficient width from the left hand side on the overlap.

Just before the end of the first half, Townsend was on in the act again as he took the role of a provider for Spurs’ second goal of the night. His beautifully crafted cross found Paulinho in the box and the Brazilian nodded the ball home from close range.

After half-time, Spurs took the game beyond any doubt after Townsend from the wing again picked up Roberto Soldado in the six-yard box, and the Spurs’ record-signing didn’t need any second invitation to dispatch that.

Spurs went close again few minutes later, when Townsend was let free on the right side of the pitch. The youngster dinked it in the box for Paulinho, who kicked it wide.

In the 64th minute, substitute Nacer Chadli scurried into the penalty area before laying it back to Danny Rose, who swung a powerful left-footed shot, right into the top corner, leaving goal keeper Giorgi Loria a mere spectator.

The final nail in the coffin was completed when that man Chadli again produced a delightful cross from the left and picked out Soldado, who like a typical predatory-striker does the rest of the job with a side-footed finish.

What was more pleasing – the result? performance? We would love to hear your thoughts on the match.