Goalkeeper Diego Lopez is on the verge of quitting Real Madrid, AS has reported. After completing the signing Keylor Navas from Levante, the club have decided that Lopez’s future lies away from the Santiago Bernabeu. Monaco and Napoli are said to be interested in signing the 32 year-old. 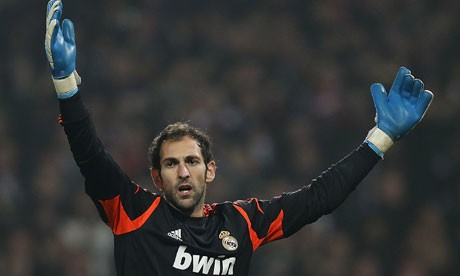 Lopez still has three years left on his contract and is therefore set to receive a hefty amount in compensation, believed to be around €12 million. The club’s decision to let him go will come as a surprise to some, taking into the account the integral part he has played in the team in the last couple of years. Over the past year, there have been consistent rumours of Iker Casillas leaving the club after being replaced by Lopez in the starting XI, but manager Carlo Ancelotti has confirmed that it will be the latter who starts the Super Cup against Sevilla next Tuesday.

Lopez spent two seasons with Real Madrid between 2005 and 2007, but only made 2 appearances in La Liga. Casillas was the undisputed No.1 at the club and Lopez found it impossible to break into the team ahead of the Spanish skipper. He was re-signed by Jose Mourinho in 2013 and made the starter ahead of Casillas, a decision which at the time, raised several eyebrows.

Lopez though, justified Mourinho’s decision by establishing himself as one of the best keepers in the league. He was preferred over Casillas in the league even by Ancelotti. He made a total of 62 appearances over the last two seasons.

The club’s signing of Navas though, has put Lopez’s place in jeopardy. The former has been outstanding for Levante over the past two seasons and also impressed with his performances at the recent World Cup for his national side Costa Rica.