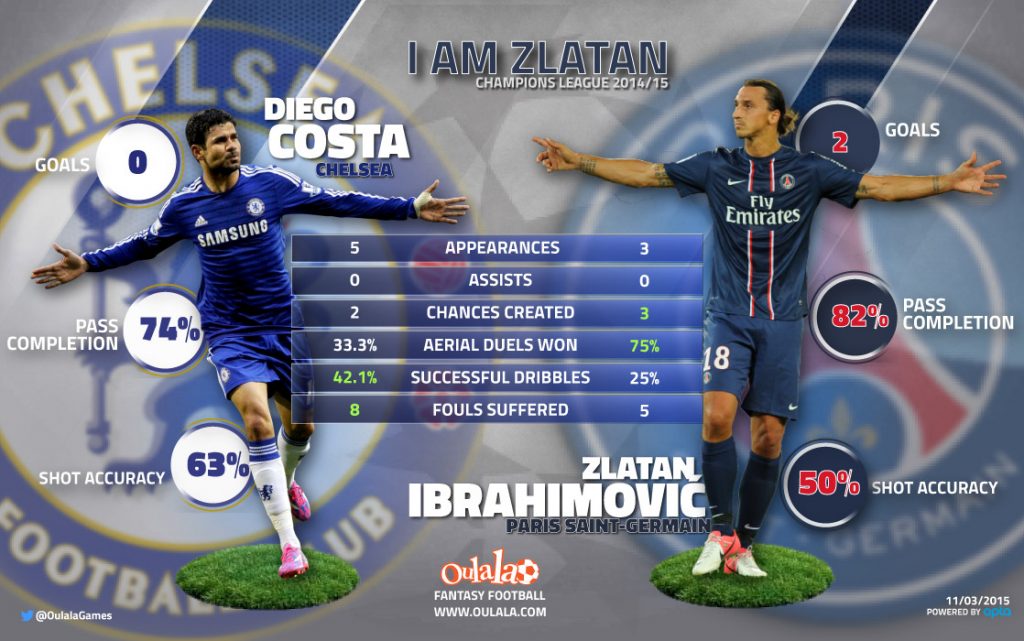 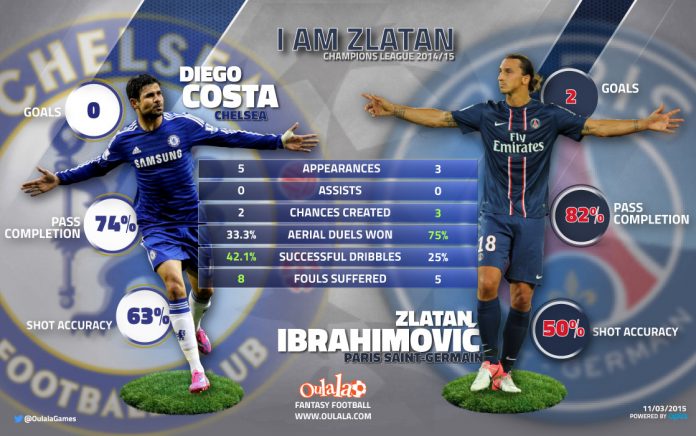 Paris Saint-Germain need to score this evening to have any chance of making it through to the Champions League quarter-finals and they’ll be turning to one man in particular for goals, striker Zlatan Ibrahimović.

The 33-year-old missed last season’s second-leg between the two sides at Stamford Bridge through injury. Paris failed to score, the game finished 2-0 and Chelsea went through narrowly on away goals.

This time the Swede is fit and raring to go. Due to his obvious goal-scoring threat, Opta-powered European fantasy football game Oulala decided to pit Ibrahimović against Chelsea’s very own hit-man, Diego Costa, to see how the two have both fared in this season’s competition.

With Chelsea the group stage top scorers, it is a surprise that the Chelsea striker is yet to find a Champions League goal this season. Ibrahimović on the other hand has netted twice in just three matches. In spite of this it is Costa that has the better shot accuracy, 63% to Ibrahimović’s 50%.

Neither player has provided an assist in this season’s competition, however it is Ibrahimović that has created one chance more for team mates than Costa has. The PSG striker has also been superior for passing, a completion rate of 82% to Costa’s 74%.

Standing three inches taller than Costa, it is no surprise that Ibrahimović has won far more of his aerial battles this season, an impressive 75% compared to a disappointing 33.3% from Costa. With Chelsea captain John Terry having a 68.8% success rate aerially in Europe this season, his battle with Ibrahimović should be an interesting one.

On the ball Diego Costa has outperformed Ibrahimović completing 42.1% of his dribbles to 25% from the Paris forward. This will explain why Costa has also drawn more fouls from his opponents, 8 overall compared to 5 from Ibrahimović.

The signs are that if Paris wish to progress to the next stage the responsibility falls firmly at one mans feet.