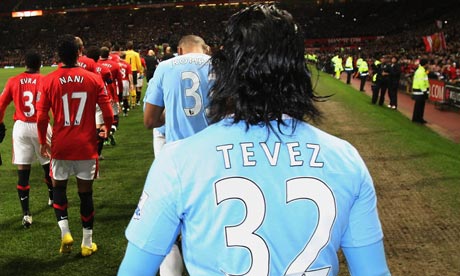 A week ago, I spoke of the significance of Manchester United’s draw with Everton and how much the title race had been affected. The impact has been huge; this has been made clear throughout the footballing world for the last 7 days.

Roberto Mancini might still be trying to convince himself that the title is already Manchester United’s this season but the rest of the football world knows that tonight’s Manchester derby is a colossal battle that can send the title either way.

The climax to this Premier season looks set to surpass any other before it as the league’s top two teams go head to head in what many are calling the biggest Premier League game of all time. Tonight’s game is expected to attract 650 million television viewers.

Current Sky Bet odds stand at 11/10 Manchester City win, 12/5 Manchester United Win and 5/2 for a draw. Clearly the home side are favourites to take all 3 points.

A draw – and United would need four points from their last two games to win the title, regardless of what City do. A victory against Swansea in their next match would clinch it if City fail to win at Newcastle.

United win – and the title is all but in the bag. One more point would seal it.

As big a prospect as it may be for Manchester City to win their first top-flight championship in 44 years, thereby denying their arch rivals Manchester United, both teams will be concentrating first on keeping 11 players on the field.

Ignoring the Community Shield, previous encounters this season have involved a man being sent off, with Jonny Evans seeing red in City’s 6-1 rout at Old Trafford and Vincent Kompany dismissed during United’s 3-2 FA Cup victory at the Etihad. These events had a big impact on the eventual score line in both matches.

So with City three points behind United and needing the win far more than their neighbours how will managers Roberto Mancini and Sir Alex Ferguson prepare their teams?

Of both teams back fours, United’s looks the more vulnerable. Having conceded four goals against Everton last Sunday, questions have re-appeared about the form of Rafael, Rio Ferdinand, Jonny Evans and Patrice Evra. Although, United’s defence has the best record in the Premier League for clean sheets (18) and is second only to City in terms of goals conceded.

Some may consider United’s defensive mishaps against Everton a blessing in disguise. No doubt, Ferguson will have used this week to iron out any mistakes seen last weekend; creating a stronger more effective back four.

But up against the top-flight’s leading scorers they will have a far sterner test in contrast to their previous seven games which have all been against teams in the bottom half of the table. Sergio Aguero and Carlos Tevez have formed a deadly partnership of late; United could struggle to prevent the goals flying in. On top of this, the end of Mario Balotelli’s 3 match suspension will give City a boost going in to the match, having scored 2 of the 6 goals in his team’s 6-1 win earlier this season.

City’s attacking options are enough to win them the game, but City will have to keep their nerve in other areas of the pitch. The performance in midfield will be key but the attacking players will need to play there role. So much emphasis has been placed on this game that a tight encounter could be the result if the star players don’t play well and create chances.

But against Everton, United winger Nani showed he can pop up in danger areas across the pitch and underlining his status as a big game player. Although there have been concerns over his fitness ahead of the match, if he’s okay to play, It’s likely he will be in the starting line up. On top of this Antonio Valencia, who did not play at Old Trafford last time, and Scholes have been catalysts for United in their run of 12 wins in the last 15 league games. Both players should both be selected, but Ferguson will expect big individual performances if United are going to take anything away from the match.

It has also been suggested that Fergie will attempt to bolster central areas by asking Wayne Rooney to play a deeper role. In my opinion this is unnecessary, Welbeck and Rooney’s work rate up front will compensate for one less man in midfield.

Mancini has some big decisions to make regarding midfield selections. It’s likely he will continue will the recent 4 man midfield of Yaya Toure, Gareth Barry, Silva and Samir Nasri. City’s FA Cup semi-final victory over United last season came when Mancini chose to let Yaya Toure off the leash and play him in a five-man midfield behind Balotelli.

Needing a win, 4-4-2 is certainly the most attacking option for Mancini’s side. But it’s possible the Italian might be more cautious to begin with. However, Mancini will have studied the Everton draw when the Toffees’ five-man midfield swarmed around Michael Carrick and Paul Scholes. This could influence his decision.

As solid as City look when captain Kompany is in the side, he and his fellow defenders will have to be on top form to deal with the threat of Danny Welbeck and Rooney.

The duo have registered 35 goals and eight assists between them in the Premier League this season to go with the three they scored against City in January’s FA Cup win.

The pair are “forming a great partnership” although some would consider City to have enough quality to deal with them.

Ferguson is likely to keep Hernandez to the bench due to a lack of form in recent matches.

Manchester United have won 67 of the 161 matches between the clubs since they first met in the old Division Two in 1894. City have 44 victories, with 50 draws.

Manchester City have failed to score in their last three Premier League games at home to United. They drew 0-0 last term, having lost 1-0 the previous two seasons.

United’s 6-1 defeat to City in October was their heaviest ever Premier League defeat, and the first time they had conceded six at Old Trafford since 1930.

Roberto Mancini’s side have won 21 of their last 22 home matches in the top flight, and are unbeaten in their last 27 games, claiming 77 points from a possible 81. The last team to leave the Etihad Stadium with maximum points was Everton on 20 December 2010.

City have not conceded a first-half goal in 19 of their last 20 Premier League games, and have let in only six all season.

Carlos Tevez and Sergio Aguero have started four Premier League games together this season, with City scoring 15 goals in those matches – 12 netted by the Argentine duo.

Tevez has scored or assisted a Premier League goal every 55 minutes this season.

The Red Devils have yet to win a league game after conceding the opening goal this term (D3, L4).

They have dropped five points in their last three games, as many as they let slip in the first three months of 2012.

Wayne Rooney has scored 16 times in his last 14 appearances for the club.

Both teams have enough quality in attack to win the match alone. However, neither side has the strongest possible defence; any mistakes will lead to goals. However, there’ll surely be no repeat of the defensive aberrations that saw United concede four to Everton last weekend (let alone the six against City in October) and with them only needing a point to make sure they stay in command of things, you’d expect Ferguson to set up his team to make sure they get it.

In my opinion, the game will be won in the midfield, you can guarantee if Tevez starts he will be dropping back into midfield and helping out, United have to make sure they don’t get outnumbered there, so Rooney may have to sit a little closer to Carrick and Scholes. Both teams’ midfielders pose a big goal threat, but will be heavily relied on to create the chances for the strikers.

Expect United to park the bus, similar to how they did in the 3-2 defeat where Kompany was dismissed in January. They just sat back and played on the counter-attack .However, I wouldn’t be surprised if Mancini also approaches this game extremely defensively.

Manchester City clearly have the stronger side, plus the advantage of playing at home. They’ll be the more confident team going into this evenings match.

No doubt this is going to be an extremely nervous encounter; with so much to lose neither side will be willing to make mistakes. Roberto Mancini’s team have dropped only two points at home all season while United have the best away record in the division. Surely something has to give?