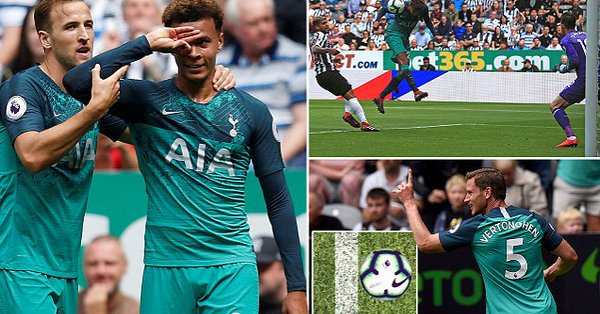 Tottenham Hotspur opened their 2018-19 Premier League campaign with a 2-1 win over Newcastle United on Saturday at St James’ Park.

Spurs were far from their best but Mauricio Pochettino’s side did enough to pick up all three points against Rafael Benitez’s side.

Jan Vertonghen opened the scoring for Spurs inside the first 10 minutes before Joselu levelled for the Magpies with a glancing header. However, Spurs quickly regained their lead after Dele Alli scored a free header from six yards out.

The 22-year-old later took to social networking site Twitter to express his reaction. He kept it short and simple, saying “Back to business”.

Back to business ⚡️ #COYS pic.twitter.com/6tL5TS6h0j

Here are some of the best responses from Spurs’ fans on Twitter:

Brilliant today Dele and a well taken goal. More to come, I’m sure of it. Great to have you back. ?

You were unreal, well done

Great goal Dele and an excellent defensive performance for the team COYS!!

You were outstanding yesterday mate. The best player on the pitch

The England international has taken his game to a different level at Spurs since he joined from MK Dons in 2015. A key player for both club and country, Spurs will be counting on Alli to deliver once again.

With the goal against Newcastle, Alli now has 64 Premier League goals and assists to his name, more than any other player by the age of 22.

Against the Magpies, he registered 61 touches, made 38 passes, attempted two shots on target, and covered 9.9 kms during the game, according to Sky Sports.

Spurs haven’t signed a single player in the summer transfer window with Pochettino trusting his key players to deliver this season. If Alli and others can play to their fullest potential, Spurs will once again be a serious contender for the Premier League title.