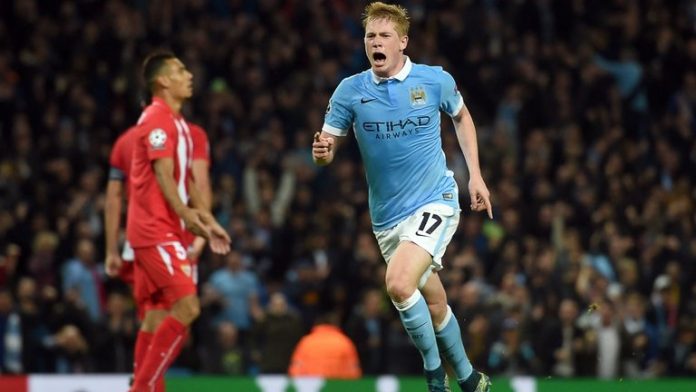 The Belgian midfielder picked the ball up from a maurauding Yaya Toure counter-attack in the 91st minute of the game, before cutting inside defender Vicente Iborra and hitting a sweet strike with his left foot into the far corner.

De Bruyne was the shining light on an otherwise abject performance in Europe for the blues – who looked disjointed and clearly missed their two star players, Sergio Aguero and David Silva.

Manager Manuel Pellegrini desribed the midfielder as the ‘perfect signing’ in his post-match interview – as De Bruyne notched a fifth goal in his first eight games at the club. The Bundesliga Player of the Year has also been the chief provider in this period, picking up from his unbelievable games-to-assists ratio he enjoyed at Wolfsburg by creating a further five goals for his new teammates.

In terms of the games itself, City struggled to impose themselves on their Spanish opponents – who will feel aggrieved that they failed to come away from the Etihad with at least a point. Ukranian international wide-man Yevhen Konoplyanka caused the City full backs problems all night, capping off a really good period of pressure from the away side by slotting home in the 30th minute.

City reacted well to going behind and equalised within six minutes, as some Yaya Toure brilliance in the box ended with an own goal off the leg of Sevilla defender, Adil Rami, following a Wilfried Bony reaction shot.

But City didn’t manage to impose themselves after their goal, and in the second half, Sevilla forward Kevin Gameiro spurned a glorious chance in the 55th minute to put the away side ahead – turning a header over the bar from just six yards out.

As Sevilla tired late on, City manager Manuel Pellegrini made a bold substitution – taking off his only recognised striker in the squad, Wilfried Bony, and pushing Kevin De Bruyne and Yaya Toure slightly further forward. The move was an inspired one, as both players linked up brilliantly for a goal that gives the club a huge boost in their plight to qualify from Group D.

Pellegrini then introduced captain Vincent Kompany in order to protect their lead, and City fans will be happy to see him back from injury with a huge Manchester derby looming on Sunday at Old Trafford.

It may not have been vintage City, but in a competition where they have struggled to impose themselves at home, De Bruyne’s brilliance may just give them the little kickstart they need.