Day Of Contrast For England And Wales As Bale Shines 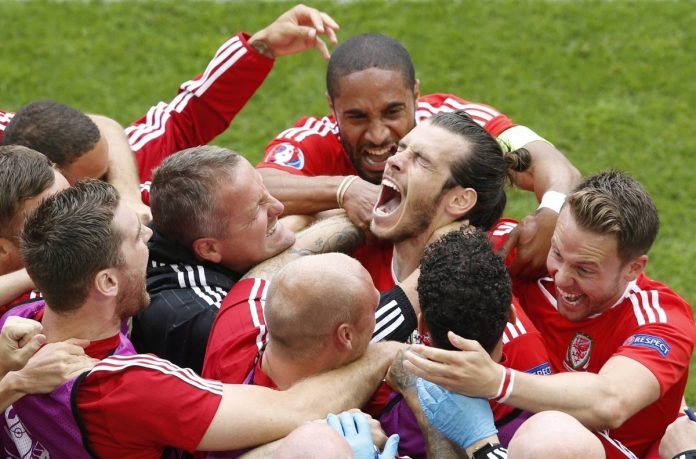 “One goal came from the most expensive left foot in world football, the other from the shin of a player who currently doesn’t even have a club. Between them, however, Gareth Bale and Hal Robson-Kanu have already taken Wales to within smelling distance of the second phase of Euro 2016.” — Ian Ladyman in The Mail on Sunday.

Contrast seemed to be the narrative in France as Group B kicked off in Bordeaux and Marseille Saturday afternoon with two British teams: Wales and England. Only one team came off the pitch bearing smiles, which will once again be the case when the two teams take on each other in Lens on Thursday.

While Bale, Robson-Kanu and their mates drank it in following Wales’ 2-1 win over Slovakia, a sense of disappointment engulfed the England camp in the wake of their 1-1 draw with Russia in violence-marred Marseille. England had a chance to right their woeful tournament opener record, only to cede a lead in stoppage time to the lacklustre Russians.

Wales started like a train and scored an early goal and then tailed off a bit to concede an equaliser before turning on the style and finding the drive to score a winner against a functional Slovakia side. England, who kicked off three hours later, also started like a train but found their opener late, hence tailing off in second half stoppage time.

In what could be a key game in the group for both sides — specifically England — in Lens, Bale could be the key differential between the two sides not blessed with superlative talents. England sparred throughout the game against Russia without a killer blow from open play and were deservedly punished, while Wales found the net with their first shot, courtesy of, you guessed it, Bale.

What Bale brings into a functional Welsh side is his undoubted quality. A shot from Bale is more likely to end in a goal than a shot from, say, Raheem Sterling. That is what astronomically expensive players offer, and Bale is one among those, always able to carry his team on his shoulders. And that is what England lack.

It’s time we cut Roy Hodgson some slack but even after not taking into account the fact England conceded the goal from a loose ball following a corner where defences aren’t at their most disciplined, England’s 16 attempts last night without any reward in open play when goalscorers of the calibre of Daniel Sturridge and Jamie Vardy sat on the bench needs some explanation.

England don’t have a Bale in their team, and that is why Hodgson should actively indulge in shuffling his pack during the game when needed. The blind alley runs of Sterling were rarely painful for the Russians last night but he wasn’t taken off. Someone like the unpredictability of Vardy or even Marcus Rashford could’ve had an effect, but all Hodgson did was making sure Jack Wilshere got a few minutes when any change in the midfield engine room was not entirely necessary.

While Wales made history by winning, England sat lamenting their meek result. Not all is lost though for the Three Lions; a win over Bale’s Wales could quickly change perceptions and mood. But a little more dynamism surely helps, and England and Hodgson will be keen to make sure they don’t repeat their mistakes of Marseille in Lens.