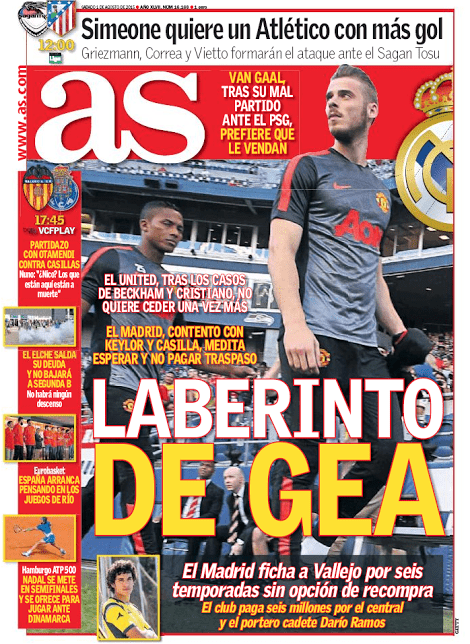 Another twist in the David de Gea transfer saga: According to Spanish newspaper AS, Louis van Gaal has told Manchester United board to sell David de Gea to Real Madrid.

That’s the front page for you. Not for the first time they have devoted the front page on De Gea, and we can assure you, it won’t be the last time they do so. Anyway, it’s the start of August – make or break situation in the De Gea transfer saga.

Before, moving deep into the story, let me just sump up the situation in few bullet points:

We really do not know what’s the truth behind and what exactly is going on at the club. Only the player, his agent and the club know ‘exactly’ what is the situation at the moment. Trust me, the rest is all ‘versions’ – every media publications have their own way of interpreting things. Likewise, Spanish media (Madrid based newspapers) have their own way of interpreting a situation.

Summary of the AS report: The Spanish newspaper believes that United don’t want to be exploited after Cristiano and Beckham deals (two big name players sold by the club to Madrid in the past few years); the main reason why they haven’t sold De Gea so far. 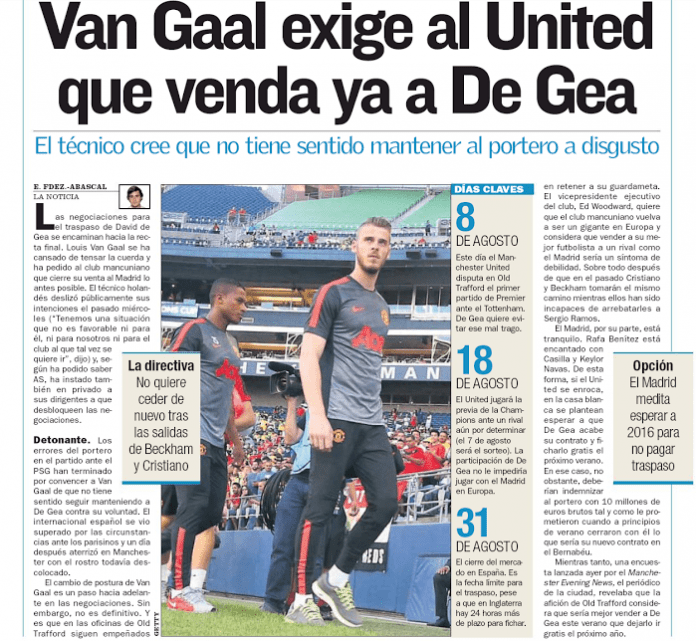 Inside, they have devoted pages to elucidate the claims why the De Gea transfer is a complex one, a saga that has taken the shape of a labyrinth. They claim Van Gaal has told United board to sell De Gea, as the Dutchman feels that there is no point to keep him at the club when his head clearly lies elsewhere.

An interesting angle: AS didn’t forget to mention that Real Madrid are happy with the keepers they’ve got at the moment. Roughly giving the idea, it’s the player’s desire to seek a transfer and it is United’s headache to deal with the situation. As far as Madrid are concerned, they’re pretty cool with it. Remember, what I said earlier – it’s all about versions!

Ed Woodward doesn’t want to sell De Gea as he thinks it would give a poor image of the club. Real are happy to wait until next summer and sign him on a free, rather than spending silly money on De Gea now. 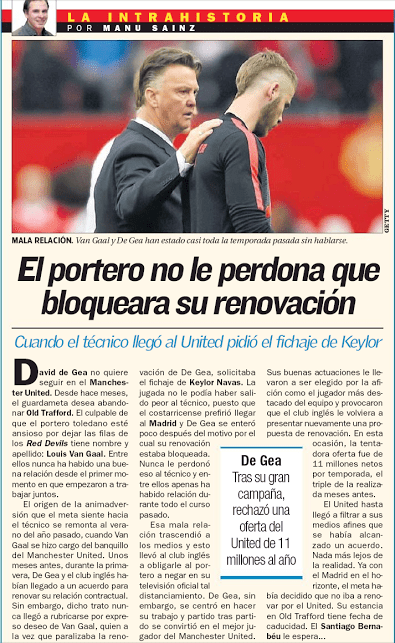 De Gea decided to leave United months ago. Who’s to blame?  Louis Van Gaal. This comes from last summer when a deal had been agreed between the club and De Gea. Van Gaal, however, told them to wait as he wanted to bring in Keylor Navas.

Navas obviously went to Madrid and De Gea found out a little later that this was the reason why his renewal had been put on hold. United then offered him 3 times the amount in the previous deal but by then De Gea had decided the time is up for him to leave.

Why don’t AS publish regular columns on psychoanalysis? No. Serious thoughts!