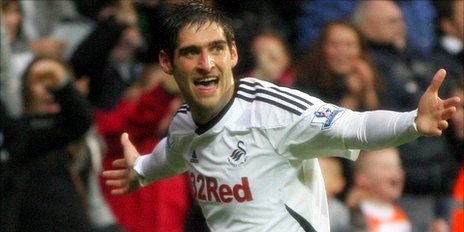 Sunderland have agreed to sign Swansea City’s striker Danny Graham for £5 million while his former club Middlesbrough are looking to hijack the deal late on.

The 27-year-old will undergo a medical at Sunderland’s Academy of Light training complex today and will most likely make his debut for the Black Cats against Reading on Saturday.

Sunderland lying 11th in the Premier League table are in need of a striker as Martin O’Neill’s side has struggled throughout the season in absence of Steven Fletcher, the club’s leading goalscorer so far.

The former Aston Villa manager rates Graham highly. Graham has scored 15 league goals in the last two seasons since Swansea were promoted from the English Championship.

Graham has become frustrated with lack of opportunities after making only 15 appearances this season, mostly as a sub. Swansea have undergone sea-change approach this season and new manager Michael Laudrup favours Michu and Itay Shechter more, as a result of which the Englishman has dropped down the pecking order at the club.

However, Danny Graham has started regularly for the Wales club in the League Cup matches and now due to this transfer, he will miss out on the final of the Cup. Swansea will face Bradford City in the Wembley Stadium on 24th February.

The Gateshead-born forward had expressed his desire to move back home to the Northeast of England to remain close to his family and his inclusion will definitely add a cutting edge to O’Neill’s side.

However, the only fly in the ointment remains here is whether he will ever be accepted by the fans as their own. Graham is known to be a Newcastle United supporter and was jeered by the Sunderland fans when he came on a substitute during Swansea’s goalless Premier League draw at the Stadium of Light on Tuesday night.

He was greeted with smattering of boos and chants of “you’ll always be scum” over derogatory comments he made about Sunderland in an interview when he was a Watford FC player.

Meanwhile, Middlesbrough have submitted a late bid of £5 million for the player and according to the Daily Mail it has been accepted by Swansea. They are keeping a tab on his latest developments and are equally keen to re-sign him.