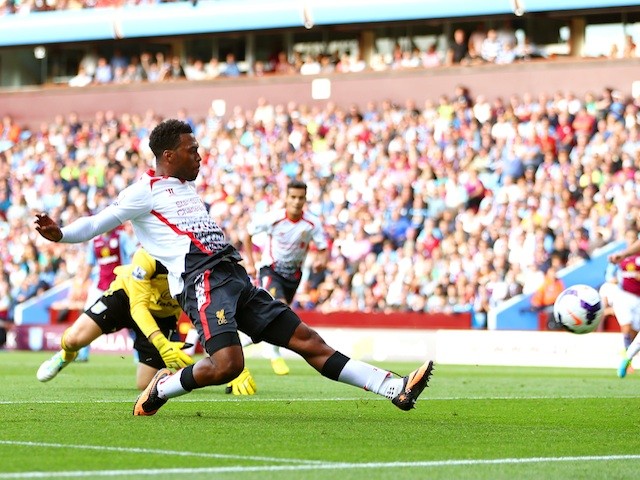 Liverpool striker Daniel Sturridge has started the 2013/14 Premier League in the same fashion he finished the latter.

The England international already has two goals from his first two games of the new season – scoring the winning goal in both 1-0 victories against Stoke City and Aston Villa to put Liverpool second in the league.

His first goal was a crisp volley hard and low with little backlift to beat Stoke ‘keeper Begovic from the edge of the area.

Sturridge’s second goal of the season was a brilliant individual effort, which saw him sidestep two challenges from Villa’s defender and goalkeeper to deftly chip with the outside of his left-foot into the roof of the net pictured.

With Liverpool’s Luis Suarez still serving a ban from last season after biting a player, it would appear his stand-in is flourishing as a result.

The England man is starting to look a more complete striker, and it’s something which wasn’t apparent during his time with former side Chelsea.

In the post-match interview of Liverpool’s 1-0 win over Aston Villa, Sturridge admitted for the first time in his career he wasn’t feeling any pressure on his shoulders to perform. He felt loved and wanted at Liverpool and was performing admirably as a result.

As expected, England talk will be next on the agenda for the 23-year old, and England manager Roy Hodgson will certainly have the striker in mind for future games.

England have been in desperate need for a natural centre-forward to be the focal point of the team, and Manchester United’s Wayne Rooney has failed to live up to expectation at international level by his standards.

Daniel Sturridge has 13 goals in 18 games for Liverpool, and one goal in six games for England. He’s expected to add to that figure this season, with an England call-up inevitable for the skilful youngster.

Can he be England’s next number 9 on a permanent basis?