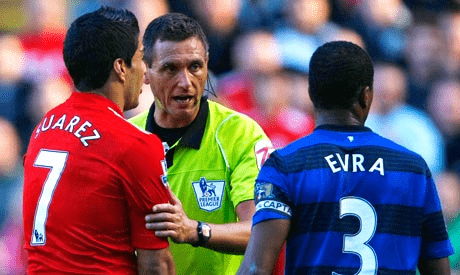 Football’s governing bodies are considering giving foreign players cultural English lessons to help eradicate racism from football. It’s difficult to see how such measures would have any such effect.

Despite global efforts to eradicate racism from football it is still prevalent now more than ever. The Premier League has seen numerous examples popping up this season with recent incidents at Tottenham Hotspur, Sunderland, Swansea City and Manchester City.

Suggesting that foreign players take cultural lessons to learn about England and the English game will not solve the problem and could further distance foreign players from a solution which can be accepted.

The underlying fundamental problem with racism in English football seems to lay with certain groups of fans and the way they are brought up to watch and be involved around football.

There is still a large element of fathers taking their sons to watch football matches and there is still a huge hooligan element to English football which is where many racism problems originate.

Prejudice can therefore be engrained onto younger supporters from a very early age which will naturally be damaging because 60% of the players in the Premier League are not British born and raised.

Suggesting that foreign players coming into the English game learn about English culture is insulting. It is not the fault of foreign players that they are racially abused and getting them to understand fans and England is counter productive.

The only way that this sort of method would work with the English game is to attack the sets of supporters responsible and try to educate them over the cultural backgrounds that many players are coming to the Premier League from.

The current method which is being proposed will simply stop foreign players from using certain words around the English game in a similar way that Luis Suarez called Patrice Evra a racial term last season which is accepted in parts of Uruguay where Suarez comes from.

It won’t actually do anything to eradicate it from the game, it’s side stepping the problem and will simply cause players to think outside the box in terms of the language they use when talking back to a player.

A much better way to tackle this problem is to educate fans filled with prejudice and hatred from a very early age and impose bans which stop any racist fans from watching football. If they are not in any ground across England or the UK then there won’t be any in-play incidents.