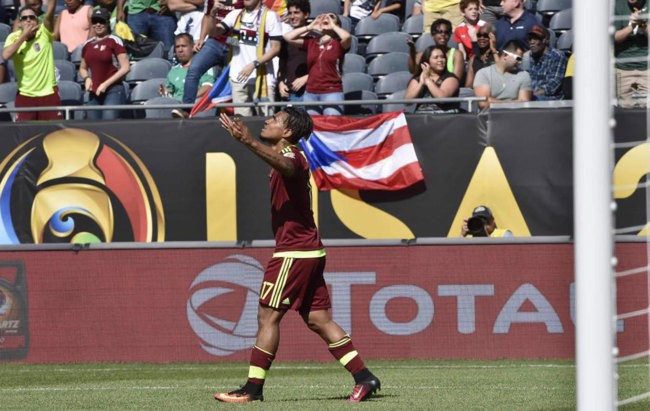 Copa America’s Group C began today with the clash between Venezuela and Jamaica. The game is definitely one of those matches that only a few people look for, but if you were among those that did not watch it, you missed a few interesting things. The most important one would be Andre Blake’s amazing performance. What a goalie this man is! The current Philadelphia Union goalkeeper was driven to maintain his clean sheet but conceded after a bad build-up from his teammates, in which the Venezuelan national team stole the ball and Josef Martínez put it past the keeper born in May Pen.

After Martínez’s goal, Jamaica lost their cool momentarily and that resulted in a yellow card for Michael Hector in the 20th minute and a red card three minutes later for Rodolph Austin, for a challenge so violent, that I am surprised he is not spending the night in prison. Twenty minutes later, Arquímedes Figuera, returned the favor with a similar challenge, but since he did not actually hit his rival, he only received a yellow card.

Leicester’s captain, Wes Morgan, was put on instead of Kemar Lawrence and the Jamaican team became a bit more dangerous on set pieces, but did not manage to break Dani Hernández’s goal, who performed admirably on a couple occasions that could have cost “la Vinotinto” the three points. The Jamaicans hit the post twice and were very close to tying it, but in the end, the Venezuelan National team managed to keep them at bay; this was a great first match and a sort of training for what is to come for both teams, as they share a group with two potential candidates to lift the cup on June 26th at the MetLife Stadium: Mexico and Uruguay.

The end result was a game that Venezuela clearly dominated and where they only suffered sporadic attacks that could have ended badly for the South Americans, but they held their ground and left the stadium with three points that give them hope to advance to the next round.

On a funny note, and that is only because he did not get hurt, one of the cameramen got knocked out by the ball. Better keep your eye on the ball!