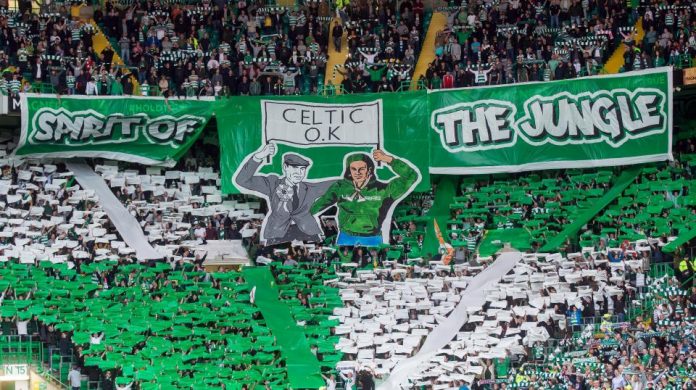 A controversial Celtic supporters group has confirmed it will return to Celtic Park for the Champions League clash with Astana on Wednesday.

The Scottish champions are 180 minutes away from securing a place in the group stage and they’ll be roared on by the Green Brigade who have ended their boycott after a row with the club over behaviour.

The Green Brigade unfurled a controversial ‘paramilitary’ display during the recent match against Linfield, resulting in a two-game ban.

The majority of the group then boycotted Celtic’s Betfred Cup win over Kilmarnock, despite the ban ending after the league opener against Hearts.

In a statement released to the Daily Record the group said: “The Green Brigade are pleased to confirm that the outstanding 150 suspensions of those within our area have now been revoked and the group will return to Celtic Park on Wednesday night for the Astana match.

“For those who were suspended and are on the HCTS – if you have had money taken already then your season ticket will be activated as normal.

“For all others, including those on the HCTS who have not had money taken and those not on the HCTS, you will be able to purchase a ticket through the usual channels of e-ticketing, phoning or visiting the ticket office.

“We would like to take this opportunity to thank all of the fans who have supported us through this period and encourage all to take up their tickets and pick up their voices for Wednesday night.

“It should go without saying that every fan has a massive role to play in roaring Brendan (Rodgers) and the Bhoys on as we fight for our place in the Champions League and we are relishing our own small part to play.”

Complaints were made to police over the former Celtic manager’s behaviour after Hibs’ first goal in a 3-2 victory.

A Police Scotland spokeswoman told the BBC: “Officers reviewed the events at the match and talks with the procurator fiscal established that no criminality took place.

“Therefore no further action will be taken.”

Lennon was criticised by some Rangers fans for cupping his ears and making a gesture as he celebrated Simon Murray’s 21st minute equaliser.

After the game Lennon denied he had done anything wrong.

“I didn’t make a gesture, I celebrated a goal,” he said. “If they are unhappy about it they can come and tell me. But I shouldn’t get into trouble for doing that.

“I am celebrating a goal. What way are you supposed to celebrate a goal?”