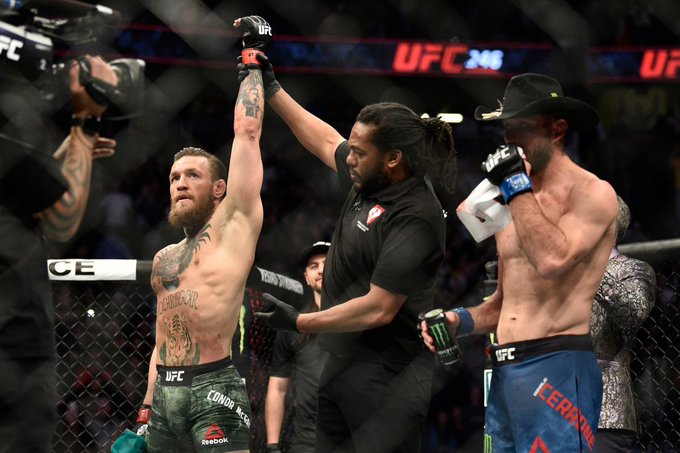 Conor McGregor has secured a sensational victory against Donald ‘Cowboy’ Cerrone at UFC 246.

‘The Notorious’ wasted no time in dominating the fight. He delivered a series of brutal shoulders to the nose of Cerrone that left Cowboy stunned and bloodied.

Cerrone was left with a broken nose by the ferocious shoulder strikes before McGregor blew him off with a perfectly timed head kick that landed on the jaw.

Referee Herb Dean gave the veteran every opportunity to recover, but the fight was waved off after just 40 seconds to give McGregor his first win inside the octagon since November 2016 when he defeated Eddie Alvarez.

With this win, McGregor has become the first fighter to win via knockout as a featherweight, a lightweight and now a welterweight.

Check the video below [via @FTBeard11]

“IRELAND, BABY!” 🇮🇪@TheNotoriousMMA thanks everyone for their support #UFC246 pic.twitter.com/qZwjAxycH8