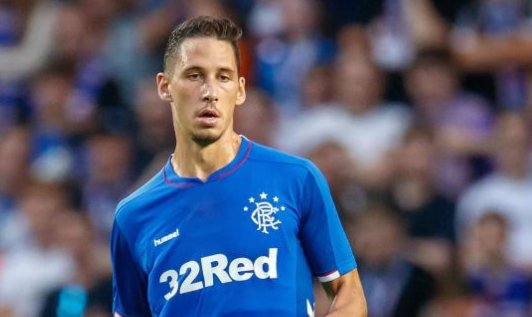 Despite Rangers running out 4-1 victors against Hamilton Academical on Sunday, Kris Commons wasn’t pleased with the performances of a handful of players. He said Jordan Rossiter, who has been sidelined with a calf injury for 12 months, “was a bystander” and was critical of Nikola Katic too.

Commons said that the Croatian u21 international “had a poor game” and didn’t respond well to being substitute by Steven Gerrard. The former Celtic forward wrote in his Daily Mail column that: “Jordan Rossiter was a bystander, while Niko Katic also had a poor game. Both of them were subbed and Katic reacted angrily by throwing his jacket into the dugout.”

Katic joined Rangers from Slaven Belupo in July and has gone on to make 17 appearances in all competitions, scoring two goals. The centre-back, who recently turned 22, has been a regular under Gerrard and has helped Rangers keep up the pace with bitter rivals Celtic.

The two sides may be separated by three places in the Scottish Premiership, but there’s only two points between them. Rangers are coming off the back of four wins from their last five and have shipped only nine goals in nine league games this season.

Katic has played his part of such success, so Commons’ criticisms aren’t reflective of 2018/19 as a whole – Katic started the campaign strongly and has looked short of confidence of late.

For Gerrard to withdraw the centre-back in the 79th minute hints that his performance wasn’t on-par, but the Rangers boss won’t be pleased to see him lashing out in anger to his decision.