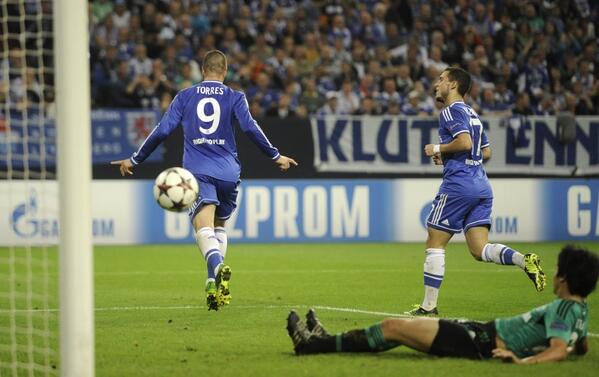 He hinted of returning back to his old self against Tottenham Hotspur in the London Derby. Although he didn’t get a goal to his name, but he was giving the impression of the player he was once used to be. Last night, Fernando Torres rediscovered himself again and inspired Chelsea (in his 100th start for the club) to a comfortable 3-0 victory against German side Schalke 04 in the Champions League.

Despite picking up a red card against Spurs, the £50m striker who endured a tough time at Stamford Bridge was heavily praised by manager Jose Mourinho. The Portuguese said:

“I was watching Fernando’s matches for Chelsea in other seasons and it looked to me, a bit heavy, a little slow. Fernando now looks in fantastic shape.

“He played a very good game. He knows what I think, I don’t have to tell him. He knows I’m very happy with his performances. He knows already.”

Still, there were doubts. Many a times in the last few years, Chelsea managers thought the same whenever Torres had scored goals. But, the end result was never satisfactory. However, this time probably, there is no false dawn.

Torres’ game was always centered on raw pace and proper positioning. During his time at Liverpool, Rafael Benitez used him as a lone striker with Steven Gerrard behind him in the 4-2-3-1 formation. Liverpool were one of the best counter attacking teams in the world back then and Rafa could use Torres’ pace to good effect.

For example, take a look at this goal. It was in 2009/10, against Manchester United at Anfield. Prior to the match, he was injured and was just passed fit enough to play the game. Naturally, his moment throughout the first half was hardly noticeable. Probably, he saved all his energy for this classic goal. Look at his position. Just before Yossi Benayoun delivers the ball, how nicely he placed himself between Rio Ferdinand and Nemanja Vidic. At the time of release he gets away from the Serbian and then by the time ball was on to him, he was almost out of reach. Ferdinand somehow tried to hold on him but he was simply unstoppable.

That was what Fernando Torres was all about. At Chelsea, he was drafted into too many new systems due to rapid change of managers. He had to sacrifice his natural game and adapt to the changing systems around him. Rarely did we see him charging at the defenders, getting the better of the last defender through sheer pace (like the goal he scored in Euro Cup final 2008) or challenging for the ball shoulder to shoulder rather he was more eager to play safe. Instead of taking on the defender on his own, he was more than happy to pass it around.

Against Spurs, for the first time in many years, we saw Torres was actually feeling confident about his game. He was charging at Spurs defenders in the second half and looked more agile in his movement.

And as often with the case, the careers of pace oriented players are always blighted with injuries, Torres was of no exception. Probably, a reason, why his pace has dropped down with age.

Against Schalke, he simply carried on where he left off last time. He was willing to take the risk, run the extra yard and gave the impression of a true no 9.

Is he coming back to his old best? Bit late actually in his Chelsea career, but they say better late than never…