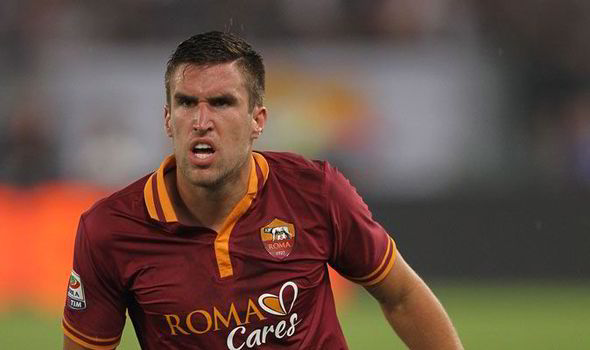 Manchester United’s long-term target Kevin Strootman has been on the sidelines since January, after undergoing an operation on his knee. The Roma midfielder’s recovery, it seems, is not going according to plan and the Serie A side are looking at a replacement as a result. It was reported in the Italian newspaper Gazzetta Dello Sport that Roma feel the need to sign a top-quality midfielder rather than waiting on the Dutchman’s return, which is getting delayed more and more. 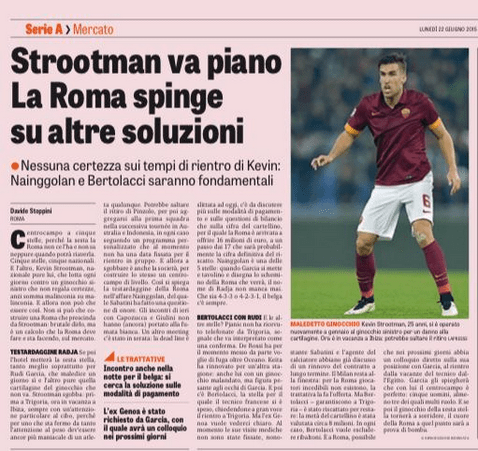 Stories of a transfer to United were extremely common in January, and it was also stated that the Red Devils were confident of landing him at Old Trafford. Louis van Gaal missed out on his compatriot, and also failed to sign anyone else, meaning that the central midfield position remained a cause for concern for United throughout the campaign.

Strootman was a regular for Van Gaal in the national side, even though he missed out on the World Cup finals in Brazil last year through a knee injury. He has undoubted quality, and at United, he would work with a manager who knows and understands his game inside-out.

Strootman is hard in the tackle, and has a great range of passing as well. With Michael Carrick missing for most of last season, United didn’t have any kind of cutting-edge thrust in the middle of the park. There is a lot of talk of Bastian Schweinsteiger being close to a move, but at 25, Strootman is a better prospect for the future.

Of course, a player is never the same after an anterior cruciate ligament injury, and United know that only too well after Radamel Falcao’s stint at the club last year.