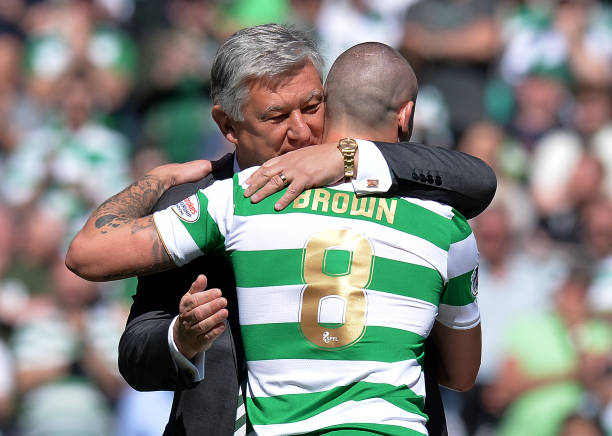 Celtic secured a comfortable 3-1 win against French side Rennes on Thursday night, securing the top spot in their Europa League group with a game to spare.

It’s the first time the Hoops have won their group in Europe and gone five games without a loss at the stage.

Celtic were without French striker Odsonne Edouard for the game, and Lewis Morgan led the line, with Leigh Griffiths settling for a place on the bench.

“The only major concern remains up front. Odsonne Edouard’s absence on Thursday night only highlighted how precarious the situation is. Lewis Morgan did an admirable job and scored a good goal but it’s a not a viable role in the long-term for him,” Sutton told Daily Record.

“Edouard is another level and he’ll be needed during this hectic spell in the run up to the winter shutdown. The fact Leigh Griffiths was only on the bench was another message – to him as well as the Celtic board.

“Griffiths still has work to do to get back to full fitness – while Peter Lawwell now knows Lennon needs to be allowed to bring in another front man in January. Forget about the Green Brigade and pyros – that is the real burning issue for Celtic right now.”

Celtic can’t afford to be without Edouard for long given how crucial he has been to their campaign, and failure to strengthen the striking department in January could end up being a gamble that backfires.

It’s been a very impressive first half of the season for the Scottish Premiership domestically and in Europe, and they will only finish the campaign well if they keep scoring goals and winning games.

Another quality striker could go a long way in helping to boost Celtic’s chances of retaining their domestic treble and going far in the Europa League knockout stages, and it will be interesting to see what happens in January.