According to reports in Chilean national newspaper El Mercurio Juventus midfielder Arturo Vidal may be after all headed to Manchester United.

Here is the snippet of the newspaper from Wednesday’s edition. 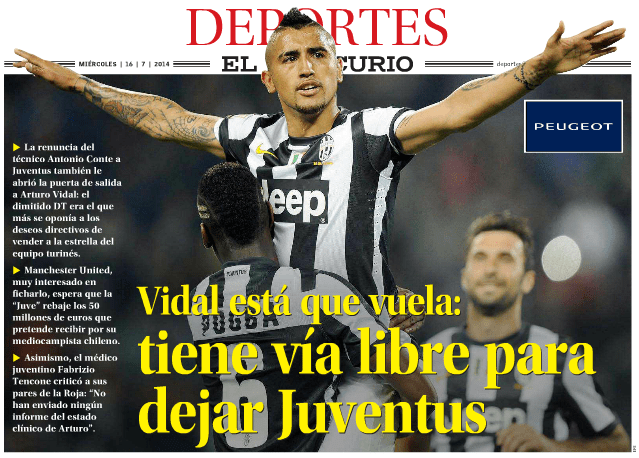 Yesterday we had extensively covered the latest developments on the Vidal to Manchester United saga in our special Transfer Lens category. Much has been made out of the Antonio Conte resignation but it is believed that 44 year old stepped down from the hot seat at Turin as the club might sell their prized asset if the Red Devils table an enticing offer for the midfielder.

The report from the Chilean daily comes on the same day as Juventus chief Giuseppe Marotta who claimed that the 27 year old is not for sale.

Marotta said: “Vidal is a Juventus player and we have never put him up for sale. A lot of clubs have asked for him but we have never sat down to negotiate.

“We want to keep him. Vidal has expressed many times how happy he is to remain in Turin and, if that is confirmed, we will be happy to continue together.”