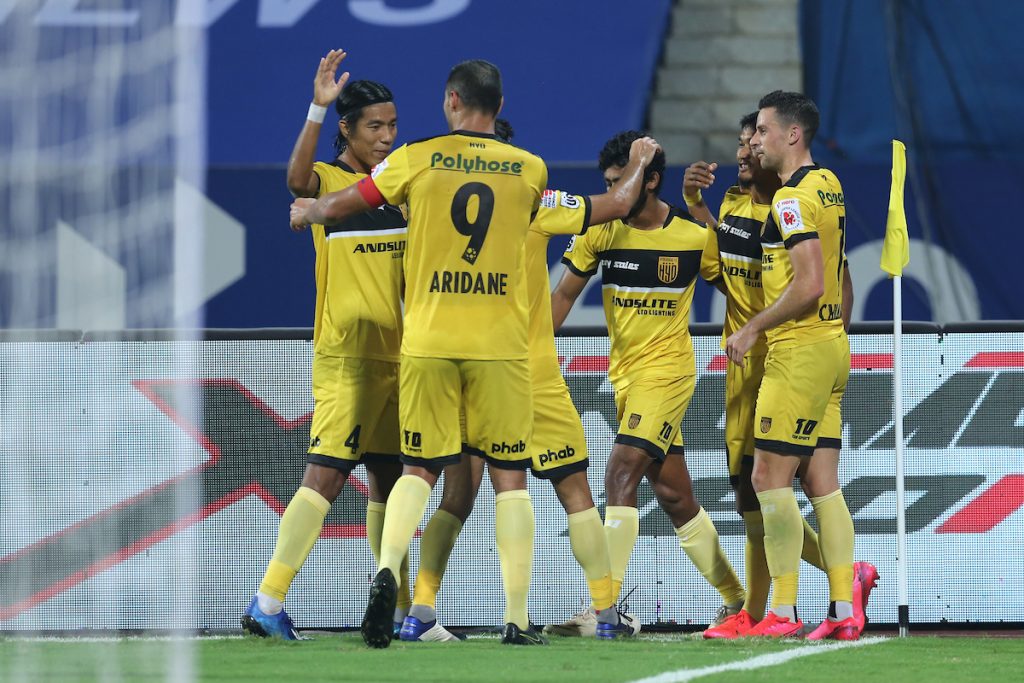 The second clash of the Indian Super League’s 10th matchday was yet another intriguing battle, as 7th-placed Chennaiyin FC played Hyderabad FC, who were just one spot below them in the table. The Marina Machans were unbeaten in their last four but had drawn three of those matches, while the away side had lost each of their last three matches after an unbeaten start. Both sides were searching for a crucial win in this important clash, and here’s what we made of it:

Within 30 seconds, Aridane sent Joel Chianese through on the right, but his low finished was kept out by Vishal Kaith. 10 minutes later, Odei Onaindia had a free header from close range as Halicharan Narzary’s free-kick reached him, but he got his contact all wrong and missed wide. The biggest chance of the match came in the 23rd minute when Mohammed Yasir burst up the right and had a hit with his left leg, but his effort was straight at the keeper. However, he spilt it and allowed Chianese to get a shot away, but crucially, he redeemed himself by getting a touch on the shot and seeing it go wide. https://twitter.com/vinee_says/status/1346101689854488576 Chennaiyin FC’s first big chance came in the 31 minute when Lallianzuala Chhangte cleverly beat a couple of defenders to cut inside from the left and opened up a shooting angle inside the box, but his effort was well blocked by the foot of Laxmikant Kattimani. Hyderabad FC somehow didn’t take the lead in the 44th minute when Asish Rai’s low cross was parried away by Vishal Kaith, but it only fell to Joel Chianese, whose close-range effort was blocked by the keeper again. Rai had a hit on the follow-up, but his effort struck the crossbar and went back out. Finally, in the 50th minute, Hyderabad FC took the lead when an attempted clearance Eli Sabiá hit Chianese and went past the rushing Vishal Kaith, allowing the Australian forward to quite literally walk the ball into the net.

Three minutes later, the ball broke for Aridane at the edge of the box following a half-cleared corner, but his bottom corner-bound effort was well saved by Vishal Kaith. The ball only broke for Halicharan Narzary on the left, though, who absolutely thumped it home.

Chennaiyin FC pulled one back in the 67th minute when Laxmikant Kattimani puzzling failed to take Reagan Singh’s low and powerless cross, allowing Anirudh Thapa to side-foot the ball into an empty net.

In the 74th minute, Hyderabad FC restored their two-goal cushion. Francisco Sandaza had a shot saved from a one-on-one situation, but the ball only broke for Mohammad Yasir. He laid it off for João Victor, whose first-time effort from the edge of the box nestled in the top corner. https://twitter.com/FilmsAndSports/status/1346117740218601472 Five minutes later, Halicharan Narzary burst through on goal from the halfway line and ignored the two players on his left to slot his finish past Vishal Kaith and make it four for Hyderabad.

Hyderabad cruised home thereafter, as they came away with a 4-1 victory.

With Rafael Crivellaro out injured, Chennaiyin FC knew that they would need some other creators to step up in this match. Csaba László made a slight tweak to compensate for the loss of his Brazilian star as he switched from a 4-2-3-1 to a 4-3-3 with Anirudh Thapa pushing furthest forward from midfield. They also had Jakub Sylvestr in the side, a man with an average of 2.8 key passes per match before this game. However, nothing seemed to work in attack for them in the first half, as they created next-to-nothing. Luckily for them, however, Hyderabad FC were missing a number of big chance at the other end and the scores were level at the break. Chennaiyin were seemingly offended by their opponents’ recreation of their favourite trick, so they decided to gift them a goal. After that, the floodgates opened, and although there was a bit of hope generated following Anirudh Thapa’s goal, it was quickly quashed.

This was a terrible display from the Marina Machans in almost all regards, and they have much to work on before their next match.

After a surprisingly good unbeaten start to the season, Hyderabad FC started to lose a lot of steam as they were beaten in each of their last three matches. If there ever was a way to bounce back from that, however, it surely was this. They could easily have opened the scoring in the first half when they, and Joel Chianese in particular, had a number of massive chances, but Vishal Kaith proved unbeatable and the goal remained elusive. The good news, though, was that their defence was largely unchallenged, so conceding wasn’t an issue in the first period. For their prior efforts, the Nizams got a deserved yet lucky lead early on in the second half as Chianese was given a present. There was no element of fortune involved thereafter, though, as they powered their way ahead. Halicharan Narzary thumped one home, and even though Laxmikant Kattimani made a horrendous mistake to make it 2-1, his side continued to march forward and two more great goals sealed the deal.

Fantastic result for @HydFCOfficial
Such a good team to watch, play such fluent football and banking on Indian young players.
So happy for Narzary, one of the hardest workers for any team he plays in. Good to see him score a brace.#CFCHFC#LetsFootball

This was a superb performance from Hyderabad – arguably their best of the season – and it came at the perfect time too.

Hyderabad had been struggling lately, but one man who was consistent throughout was Halicharan Narzary. Tonight, he got his just rewards for all the hard work in the form of an outstanding brace. He didn’t really get any chances in the first half, but when the ball broke to him favourably in the opening stages of the second period, he struck it as purely as he ever will and found the back of the net. His second wasn’t bad either, as he covered half of the distance of the pitch before coolly slotting past Vishal Kaith.

Both Halicharan Narzary's goal for Hyderabad FC today are of the highest quality. If you haven't watched them I would recommend, technically two very good finishes. He has 3 goals in 9 games this season and those two today could really set him up on a good run for the season.

The 26-year-old winger finished the match with 51 touches, a passing accuracy of 78%, 5 crosses and 2 shots from two goals. A sizzling showing.

Chennaiyin FC drop to 8th, while Hyderabad FC move up to 6th thanks to Halicharan Narzary’s first brace of the season and Joel Chianese’s first goal in the ISL. We had five goals in a half for the first time in this campaign, as Anirudh Thapa and João Victor got in on the act too with their second goals of the season. Chennaiyin FC face Odisha FC next on Sunday, while Hyderabad FC come up against NorthEast United on Friday. Stats courtesy Sofascore.com