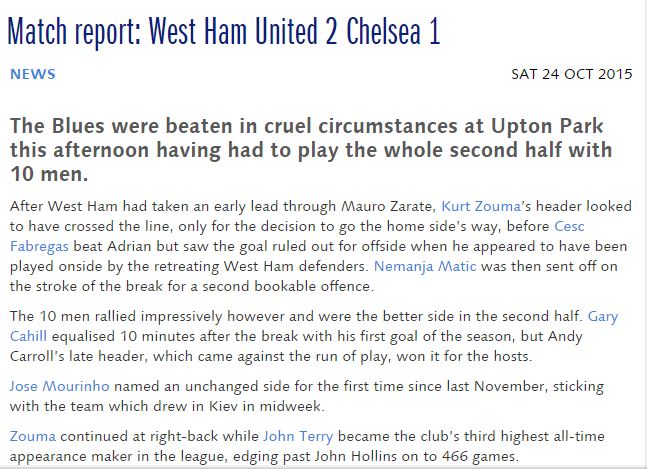 Chelsea’s disappointing run continued as the Blues suffered a 2-1 defeat at the hands of West Ham United at Upton Park during the Premier League clash on Saturday.

Mauro Zarate gave an early lead for the hosts and the defending champions were chasing the game in the first half. Things got more worse for Jose Mourinho and his side when Nemanja Matic received his second yellow just before half time.

Gary Cahill equalised in the second half. West Ham bounced back as former Liverpool striker Andy Carroll’s header later in the game gave his side yet another victory over the top sides in the league.

There were few incidents in the game, which one could feel the game did not go in Chelsea’s favour. Kurt Zouma came very close to scoring a goal as the ball did not cross the line completely, which was confirmed by the goal line technology.

Goal line technology clearly indicates the ball did not cross the line completely and as per the rule, it cannot be counted as a goal.

Former Arsenal midfielder Cesc Fabregas’ goal was disallowed after he the assistant referee found him offside. The report published on Chelsea’s official website read the defeat to West Ham cruel as the Blues felt the technology and match officials were biased in making the decision.

“The Blues were beaten in cruel circumstances at Upton Park this afternoon having had to play the whole second half with 10 men,” a report on Chelsea’s official website read.

“After West Ham had taken an early lead through Mauro Zarate, Kurt Zouma’s header looked to have crossed the line, only for the decision to go the home side’s way, before Cesc Fabregas beat Adrian but saw the goal ruled out for offside when he appeared to have been played onside by the retreating West Ham defenders.

“Nemanja Matic was then sent off on the stroke of the break for a second bookable offence. The 10 men rallied impressively however and were the better side in the second half. Gary Cahill equalised 10 minutes after the break with his first goal of the season, but Andy Carroll’s late header, which came against the run of play, won it for the hosts.”