Chelsea’s transfer policy is highly admirable. The Premier League champions manage to sell their unwanted players for a high transfer fee and use the money effectively in buying other targets as per the demand of their manager.

It is the youth system that has come under certain scrutiny. Rather it is still a work in progress. Chelsea usually buy top young talents across the world and send them on loan immediately or keep them in the reserves. In most cases, these players do not get to represent the club at the senior levels – they are eventually sold out for a higher profit.

In the long run, the club feels the need to nurture young talents from the academy. Chelsea have some wonderful young players coming out from the academy but they are deprived of much needed exposures and first team experiences. The club are trying to find a solution to counter this problem.

Chelsea act as the feeder club for Dutch club Vitesse, where the Blues usually send their young players on loan to gain first team experience. The Blues are now trying to expand their network in Portugal as well. The reason being, the Portuguese League is comparatively strong and the hotbed of highly talented Latin American talents. Therefore, it represents a wonderful chance to play with quality young players, which would only improve these players as they develop. 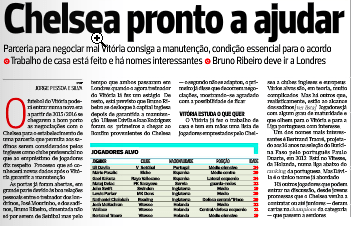 According to Portugal newspaper A Bola, an on-going negotiation is going on between Chelsea and Vitória de Setúbal for the latter to become a preferential club for Chelsea’s loanees, helped by Jose Mourinho’s good relationship with the Portuguese club.

It could be a wonderful move, where young Chelsea players mostly under 23 would get massive exposure in a competitive league, should the Blues reach an agreement with the Portuguese club.