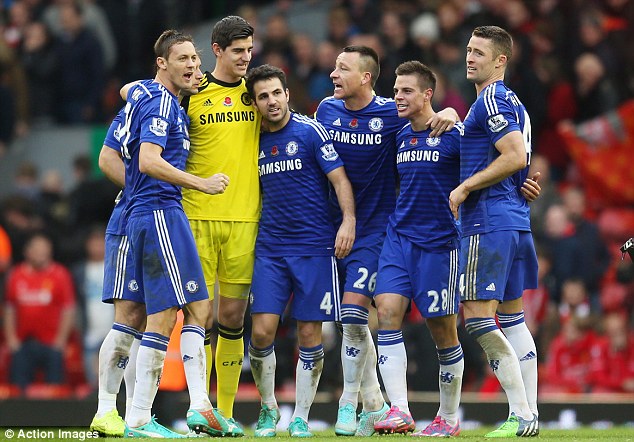 In the second part of this series, after Manchester United, we take a look at Chelsea’s best team this season. The Blues are on course to end the campaign on a high by lifting the Premier League title to go along with their Capital One Cup triumph in March. They have been runaway leaders in the top-flight right from the get go, and have a 6 point lead at the summit with a game in hand.

There have been several individuals who have sparkled for Chelsea this season, and we take a look at the best of the lot here.

The Belgian replaced long-standing goalkeeper Petr Cech, a decision that received mixed opinions on the first day of the season. He has gone on to prove his quality and has been one of the stand-out keepers in the league. Even though he has only kept 8 clean sheets in the PL, his reflexes and authority in the box have caught the eye. At 22, he is only going to get better with time.

Even though he has been defensively shaky of late, Branislav Ivanovic has been a mainstay in the side for the whole of the season. His goalscoring ability has once again come in handy on quite a few occasions, as many of his 6 strikes in all competitions have been vital ones. He is aging and a dip in form could cause him to be replaced next season, but the Serbian is very much Chelsea’s number 1 right-back at the moment.

The Englishman, like Ivanovic, has come under severe criticism this season for some of his performances. It has even caused Jose Mourinho to prefer Kurt Zouma ahead of him at times. But, for now, Cahill has regrouped and won back his place alongside John Terry at the heart of Chelsea’s defence. The Blues’ backline has been somewhat shaky this year, and the number of clean sheets they have kept is nowhere near enough. Cahill will have to step his game up to be a part of the side in the long-haul.

The Chelsea captain has defied all the odds and critics and had one of his best seasons as a defender. He has been the one big positive in the back 4 and has been rewarded with a one-year extension on his contract. At 34, he isn’t getting any younger, but if he continues playing like this, he’ll lift a few more trophies before he hangs up his boots.

When your right-back plays at left-back and keeps a world-class candidate out of the side, you know he has to be pretty darn good. Filipe Luis was signed from Atletico Madrid in the summer for a handsome sum of money, but Azpilicueta has been the main man for Mourinho, at least in the Premier League. The Spaniard, like always, is a pillar of consistency, delivering, albeit sometimes inconspicuously week-in, week-out.

The Serbian was one of Chelsea’s best players last year even though he was only signed in January. Therefore, a lot was expected from him this season and he has surely delivered. With his strong tackling and precise passing, he is one of the most complete central midfielders in the league.

After an incredible move to Stamford Bridge from Barcelona in the summer, Fabregas was quick to impress one and all with his ability to control midfield. His influence has faded since Christmas, but he has still been one of Chelsea’s best players this season. His 16 assists have been hugely important, and he has shown just what the Blues missed last season.

It was expected at the start of the season that Willian and Andre Schurrle would fight it out for the right-wing place, but the Brazilian won the battle so convincingly that the German left for the Bundesliga in January. Willian still has several doubters who feel he does not offer enough in an attacking sense. The fact that he only has 2 Premier League goals to his name shows that these people aren’t wrong. But his tireless workrate off the ball and willingness to go the extra mile for his side means that he is one of Mourinho’s favourite players.

Just like last season, Oscar has been good in the first half of the campaign and very average in the second. He has scored 6 league goals, but is yet to find the net since January. He is a player with a lot of ability, but needs to find more consistency to establish himself as a top footballer at this level. There have been talks of a move for him in the summer, and it will be an interesting story to track.

Arguably Chelsea’s best player of the season, Eden Hazard has really established himself as one of the top footballers in the world. He was full of trickery when he arrived in 2013, but now he has added intelligence and consistency to his game. His 11 goals in the league, and 16 in all competitions, show that he could be the replacement to Frank Lampard, who banged in 20 goals from midfield consistently. Hazard deserves to win the Premier League this season, and if he continues his good work for the remaining two months, he will also be the contender for the Player of the Year Award.

Chelsea have for long missed a striker who bangs in goals on a consistent basis. This year they have found the solution in Diego Costa. A big-money signing in the summer for Atletico Madrid, Costa is well on course to winning the Premier League Golden Boot, as he currently leads the pack with 19 goals. He has been a major reason for Chelsea’s lead at the top of the table, delivering consistently in front of goal right from his debut. 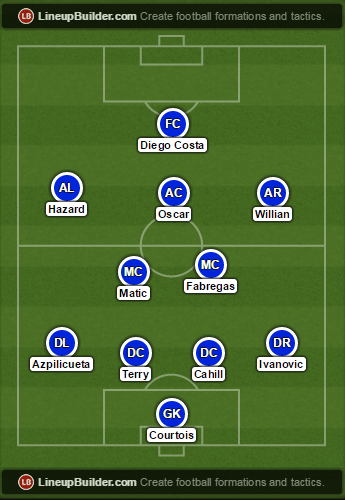 Let us know your best Chelsea team of the season, and make sure you follow Soccerlens on Twitter.