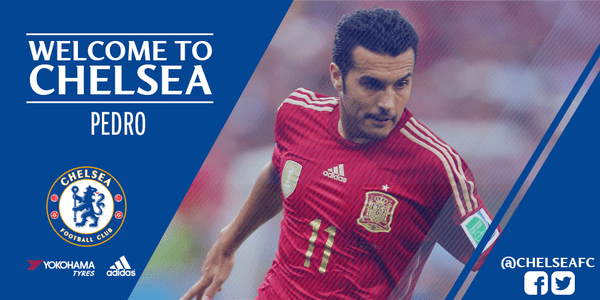 Chelsea winger Pedro Rodriguez has been linked with a move away from Stamford Bridge this summer.

The Spanish international fuelled rumours surrounding his future last week when he confirmed that he has already spoken to the Barcelona President about a summer transfer.

The former Barcelona star joined Chelsea last summer and is already angling for a move away from Stamford Bridge.

Apparently he wants to rejoin the Catalan giants because of their stature and for the affection he has received from the fans in the past.

Pedro was expected to make an instant impact in the Premier League because of his style of play. However, the Spaniard failed to produce consistently in his first season in England.

It is highly unlikely that Barcelona will want to meet Chelsea’s demands for Pedro. The Blues paid 21 million pounds for the player and will want to recoup that if they are forced to sell now.

“If you ask me if I’d go back, the answer is clear because they’re a great club with great players and fans who appreciate me,” the Spain attacker told RAC1. “I’ve always said that I’d like to retire at Barca, but I know it’s very difficult, almost impossible.”

Pedro seems determined to leave Chelsea this summer and it will be interesting to see how Conte reacts to the player’s comments now.