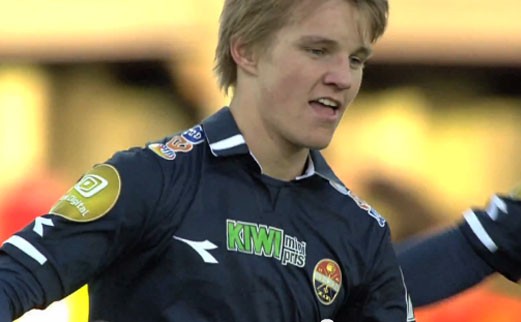 Couple of days back, The Telegraph journalist Mark Ogden reported that Manchester United are showing a keen interest in the youngster, who is a boyhood Liverpool fan.

United had scouted the youngster during his international debut for Norway. He became his country’s youngest-ever player by winning his first cap against the United Arab Emirates in Stavanger at the age of just 15 years and 253 days.

Ogden claims that Manchester United have sent scouts to keep a close eye on the youngster. The Red Devils are not the only interested parties here. Chelsea are also thought to be interested in him.

The Times claim that Chelsea are sending Michael Emenalo, their technical director, to watch Odegaard today. Emenalo oversees the club’s transfer activity will attend Stromsgodset’s visit to Aalesund in the Tippeligaen Norwegian league today as a guest of the player’s representatives.

More than 30 clubs have shown an interest in him. Although the player has an allegiance to Liverpool, he wants to join a Bundesliga club to ensure that he is fast-tracked to first-team football in one of Europe’s top leagues, but the presence of Chelsea director suggest that the Blues are heavily interested in signing him.