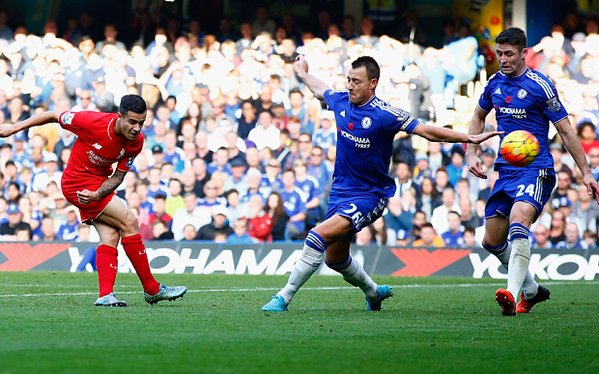 Liverpool came from behind to snatch a memorable 3-1 victory against Chelsea at Stamford Bridge.

Philippe Coutinho scored a brace and Cristian Benteke added another in the dying minutes of the match to seal the victory in the Reds’ favour.

Chelsea fans made a clear show of full support for their under-fire manager Jose Mourinho at the start of the match, and the players duly responded with an early goal inside 4 minutes as Ramires drilled his header past Simon Mignolet from Cesar Azpilicueta’s cross.

Liverpool enjoyed a lion-share of possession, but they really struggled to test Asmir Begovic, but a moment of sheer brilliance from Coutinho, who created space on the edge of box before curling a superb shot on the far corner with his left foot, bought the visitors back into the game.

In the second half, Coutinho gave Liverpool the lead after drilling the ball on the top corner leaving Begovic with no chance of saving.

Benteke coming on as a substitute for James Milner, increased Liverpool’s lead in the 83rd minute, breezing past Gary Cahill and John Terry with ease and slotting home with great composure to leave Chelsea with 11 points from 11 games.

Check out all the goals and videos from the game:

Let’s check some of the tweets from fans & journalists:

More misery for Jose Mourinho. #CFC outplayed by Liverpool in the 2nd half. Big win for Jurgen Klopp

Big worry for Roman Abramovich will be that this #CFC crisis shows no signs of coming to an end. One setback after another — Ben Smith (@BenSmithBBC) October 31, 2015

Other than the goal, Chelsea simply didn’t create anything. Good players devoid of confidence. Once the early intensity went, it was poor.

Taking this game at face value, you’d say #LFC were the side that were reigning champions & playing at home. Outplayed Chelsea at every turn

Well hello Jurgen Klopp. But will it goodbye Jose Mourinho?

Massive win for #LFC as they come from behind to deservedly beat Chelsea 3-1. This is the day that Klopp’s reign ignited

Share your thoughts below – to both Chelsea and Liverpool fans…