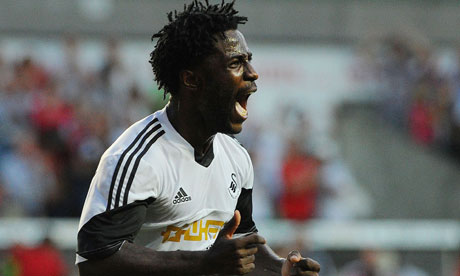 There are goalscorers, and then there are serial goalscorers. The latter crop are, of course, much harder to find than the former. This rare breed of footballers, who have an eye for goal at all times, are the most sought-after by the big clubs. A guarantee of 25-30 goals from the frontman is something which is imperative for a club to simultaneously be successful both in the domestic league and Europe.

Swansea City’s Wilfried Bony, over the last few years, has proven himself to be one of the most lethal strikers around. The Ivorian ended 2014 as the highest goalscorer for the calendar year in the Premier League, with 20 strikes. He has attracted a lot of interest from some of the top clubs in the Premier League and around Europe, with Manchester City, Chelsea and Real Madrid all reportedly interested to get his signature in January.

Bony signed a new contract with Swansea in November, thereby eliminating the £19 million release clause in his initial deal. His price will now be demanded by the Swans as and when a club shows interest. His new contract though, came with the understanding that he will be allowed to talk to other clubs. A dream for Bony, just like any other striker, is to play in the Champions League, and his performances over the last couple of years have show that he is ready to take that step up. Matt Law from the The Telegraph has stated that he is ready to make the move this month.

Should Chelsea buy him?

Chelsea have lacked a clinical goalscoring forward for the last few seasons, but have found three in their squad in this campaign. Diego Costa, signed from Atletico Madrid, is joint top-scorer in the Premier League with 14, while the returning Didier Drogba has also delivered every time he has been called upon. Loic Remy hasn’t been given too much game-time yet, but still has 4 goals to his name in all competitions.

Drogba will though, most probably leave Stamford Bridge at the end of the season following the expiration of his one-year contract. This will leave a vacancy for a striker to come in. Bony has all the qualities needed to be successful at Chelsea with his physical style and ability to hold the ball up and bring the midfielders into play.

He will not come cheap, as Swansea are not expected to sell for anything less than £30 million. The 26 year-old joined the Welsh side from Vitesse for £12 million, but his market value has certainly grown since. Therefore, Jose Mourinho will think twice before shelling out that kind of amount on a player who will not be a part of the starting XI as soon as he comes in.

Costa looks set to be the main man up front for the Blues in the foreseeable future. Remy is one of the most clinical forwards in the Premier League, and Mourinho will want to use more of him next season. Bony’s arrival may, therefore, act as an impediment to the Frenchman’s progress.

Alternately, allowing him to go to Man City will mean automatically boosting their direct rivals’ chances of winning the league. Manuel Pellegrini always has a problem up front with Sergio Aguero and Edin Dzeko being injury-prone, and Bony may be the perfect solution to his problem.

Watch a collection of goals, skills and assists by Bony in the past year in the following video:

Have say in the comments below. Should Chelsea go for Wilfried Bony?