The big news of the day has come from Italy – Inter Milan have re-appointed their former manager Roberto Mancini. Inter are struggling at 9th in the Serie A, and Mancini has a tough task at hand to take this team into a respectable position at the end of the season.

The former Manchester City manager should not expect huge transfer outlay from owner Erick Thorir in January, rather he will have to work out through smart loan deals only. Inter have been heavily linked with a move for several forwards from Premier League heavy weight clubs; Liverpool’s Fabio Borini and Arsenal’s Joel Campbell are the two names doing the rounds recently. 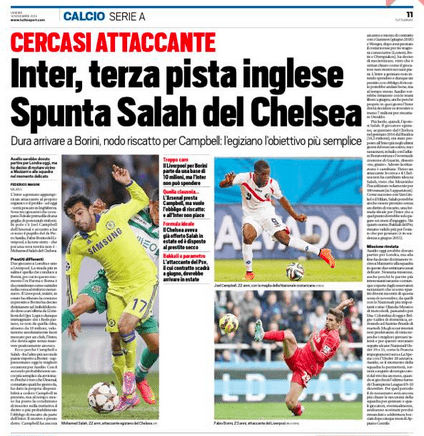 Italian newspaper Tuttosport have published an article today where they claim Inter might look at the possibility of signing Chelsea winger Mohamed Salah, who has failed to make any significant impression under Jose Mourinho, on loan.

The 22-year-old has only played two matches, both of them coming on as a substitute appearances. In a star studded Chelsea squad, it is understandable that getting regular games is bit difficult, but when a player manages only 12 minutes of league action in 11 matches, it signifies something else.

Inter’s other option, Borini has stated time and again that he wants like to fight for his places at Liverpool. He was offered a good money by QPR in the summer, but he rejected in order to focus on his Liverpool career.

Likewise, Campbell has struggled to make any bright impression under Arsene Wenger so far, and therefore the Costa Rican forward may look to join other club to get regular games under his belt.

As for Salah, it will be good for him to move to Italy and get regular games rather than waiting for rare opportunities at Chelsea. It remains to be seen whether Mancini make any move for Salah or not in January.