Chelsea are thought to be interested in signing a right back at the end of this season and Benfica‘s Nelson Semedo is apparently a target for them.

The Premier League leaders have had to use Victor Moses as a makeshift full-back this season and it seems that Antonio Conte is looking to bring an upgrade for next season. Semedo has been excellent for Benfica this season and is a target for Manchester United as well.

O Jogo are reporting that Chelsea initiated contacts for Semedo when the Benfica president Luis Filipe Vieira was in London last month. According to reports from earlier this season, Manchester United have an agreement in principle to sign the player. 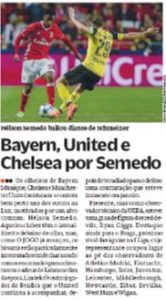 With the likes of Bayern Munich also interested in the player, it will be interesting to see who Semedo chooses to join now. Both Chelsea and United have the financial muscle to trigger Semedo’s  €60m release clause.

In other news, Juventus midfielder Claudio Marchisio is being linked with a move to Stamford Bridge.

Apparently, Conte ‘dreams’ of signing his former player and will make a move when the summer transfer window opens. Marchisio has a contract with Juventus until 2020, but the Italian international is expected to leave the Italian champions if a suitable bid comes in.

If he does sign for Chelsea, it will be interesting to see how Conte fits him into his plans. Marchisio could be a good partner for Kante at the heart of Chelsea’s midfield. The Juventus midfielder is a workhorse with better passing than Matic. Also, Marchisio can operate as the box-to-box midfielder and contribute towards goals.