It looks like Chelsea’s incredible start to the season hasn’t just got their fans hooked. The players too, seem to have sold out to the club. Eden Hazard came out last month and rubbished all talks of a possible move to Real Madrid in the near future. While it is nearly every young player’s aspiration to don the legendary white jersey in the Spanish capital, the Belgian said that Chelsea were the only club in the world which made him dream.

Now, another important first-team player at Stamford Bridge has squashed rumours about a possible move back to his homeland Spain. Cesar Azpilicueta, who has grown and grown in stature in Jose Mourinho’s side over the past couple of seasons, has said in an interview that he actually prefers the Premier League to La Liga. 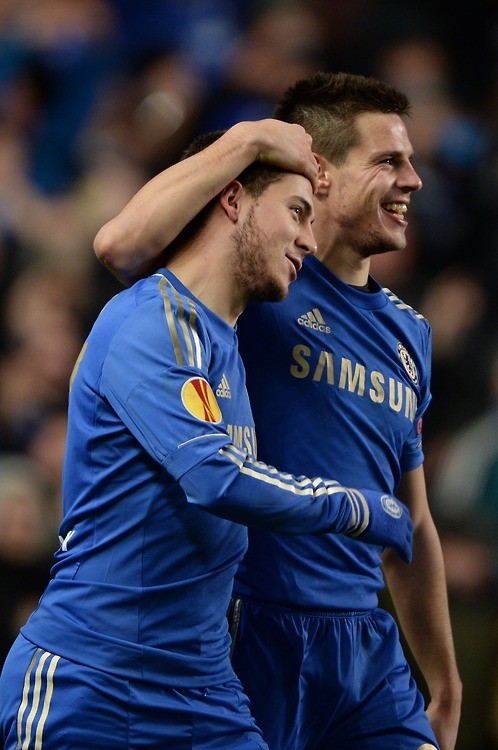 Azpilicueta said: “I do not think about [a move to Spain].

“I am very happy here. I follow La Liga but personally I do not think about returning there. Now I’m really enjoying London. I prefer the Premier League.

“Those words (from Neville and Carragher) flatter me. But also they make me eager to improve. I have always worked to be one of the best and it is clear that the more you achieve the more pressure you have”, he added in reference to Gary Neville and Jamie Carragher labelling him the best defender in the Premier League on Sky Sports (video below).

“But I still can improve a lot. Whenever I see a game, I tried to look at other players who play in my position because they teach me things to improve myself.

“I am lucky to train with great defenders and they are also an example for me.”

Azpilicueta, despite being a right-back, displaced long-standing left full-back Ashley Cole last season, after Mourinho felt him too good to be left out. He has since become a regular, and has kept summer signing Filipe Luis out of the side.

These comments by Hazard and Azpilicueta clearly reflect the rising stature of Chelsea in the footballing world. This season, they are unbeaten in all competitions, winning 16 and drawing 5 of their 21 games thus far.

The current squad is both young and hungry for success. Mourinho has managed to find a healthy balance between youth and experience, with the likes of John Terry, Branislav Ivanovic, Nemanja Matic, Cesc Fabregas and Didier Drogba all having illustrious histories of success behind them.

It is usually the norm for most young players around the world to seek a move to Real Madrid when they reach a certain stage in their careers. Cristiano Ronaldo, Gareth Bale, Mesut Ozil, Sami Khedira, James Rodriguez, Luka Modric and Toni Kroos are some of the several big names who have, in recent years, packed their bags when the Los Blancos have come calling.

The story at Chelsea though, seems to be slightly different. The current project is aimed at making the Blues not just the dominant force in England, but in all of Europe. And with a manager like Mourinho at the helm, the future looks to be very bright and laden with silverware.