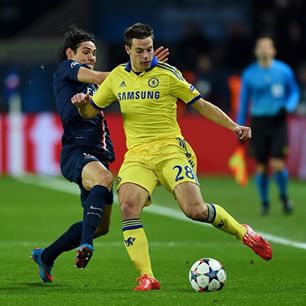 Chelsea have done some fantastic business in the last couple of transfer windows, pulling off some great deals for players who were warming the bench at Stamford Bridge. The likes of Juan Mata and Romelu Lukaku were both sold for over €30 million, while Kevin De Bruyne was deported to Germany for over €20 million.

But the best sale was undoubtedly that of David Luiz to Paris Saint-Germain for a fee of around €62 million, the highest amount ever paid for a defender. The Brazilian though, could have been joined by another Blue at the Parc des Princes.

It has emerged today,as reported here by Le Parisien, that PSG also tried to Cesar Azpilicueta in the summer, and were willing to pay in the region of €12 million for the full-back. They approached the Premier League side, but were met with a firm ‘no’. Therefore, they chose to sign Serge Aurier on loan instead.

Azpilicueta is an integral part of Jose Mourinho’s system at Chelsea, and even displaced long-time first-choice left-back Ashley Cole last season. He has grown in stature since, and is almost untouchable in his possible whenever fully-fit. One of the Blues’ most consistent performers since his arrival in 2012, and was voted by his teammates for the Players’ Player of the Year Award last year.

His workrate, grit, determination and ability to perfor week-in, week-out, has drawn a lot of praise from his manager. Mourinho, famously remarked last year, “Azpilicueta is the kind of player I like a lot. I think a team with 11 Azpilicuetas would probably win the competition (Champions League) because football is not just about pure talent”.

This is clear indication of the fact that even though the Portuguese has sold several big names in the last two years, he will not let go of his favourites at any cost.