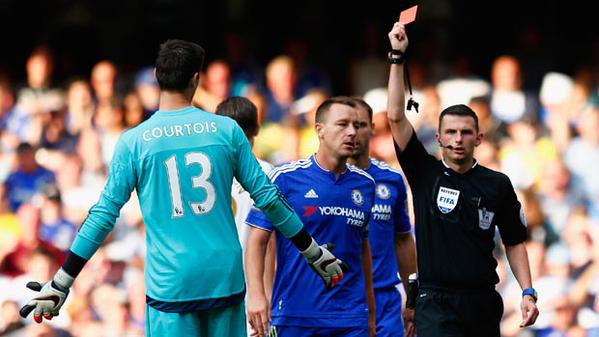 Chelsea have suffered a blow after they lost the appeal for Thibaut Courtois’ red card to be turned down by the Football Association.

The Belgium international was given a marching orders for his tackle on Bafétimbi Gomis in the second half, which resulted in a straight red card and a penalty to Swansea City. The game saw the Blues reduced to 10-men for most part of the second half.

The Premier League champions were forced to settle for a 2-2 draw in their opening match of the season. Courtois was suppose to get a one match ban and the west London club had appealed to turn down his ban.

However, Chelsea’s request has been turned down by the FA on Tuesday after Independent Regulatory Commission could not find any wrong doing from the match referee.

“A claim of wrongful dismissal submitted by Chelsea in relation to Thibaut Courtois has been unsuccessful following an Independent Regulatory Commission hearing earlier today,” a statement read on the FA’s official website.

“The goalkeeper was dismissed for denying an obvious goal scoring opportunity in the 52nd minute of Chelsea’s game against Swansea City at Stamford Bridge on Saturday (8 August 2015).

“Therefore, the player’s one-match suspension, which is the standard penalty for this offence, remains with immediate effect.

“For a club to be successful with a claim of wrongful dismissal, it must prove to an Independent Regulatory Commission via written and/or video evidence that the match referee made an obvious error,” it added.

Jose Mourinho will take his men to the Etihad as Chelsea take on Manchester City in the next Premier League fixture. The former Real Madrid manager will be without the services of his star goalkeeper.

Summer signing Asmir Begovic came on as a second half substitute and the former Stoke City keeper is expected to start against City.