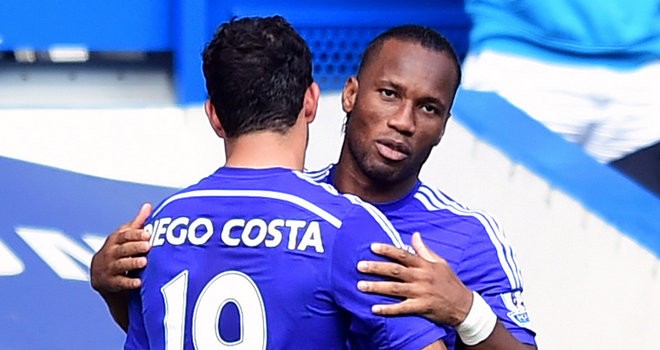 Chelsea striker Didier Drogba has declared himself fit for the Blues’ upcoming league encounter against Manchester United this weekend.

The west London club will visit Old Trafford on Sunday and Jose Mourinho is likely to be without the services of his first and second choice strikers, Diego Costa and Loic Remy.

The Spain international is yet to feature for Chelsea after returning from international duty, while the former Queens Park Rangers man picked up an injury during their midweek Champions League clash.

Drogba scored in the midweek against Maribor and the 36-year-old, who returned to Stamford Bridge in the summer believes he is still needs more playing time.

“It’s up to the manager to decide who is going to start on Sunday but, if you were a player, how would you feel if they said you can play at Old Trafford? You would be happy. I’m ready,” Drogba told Sky Sports.

“I remember that game against United in 2010. Both goals were fantastic. It was a very good feeling to win there. We had the feeling we’d won the league, even if there were more games to go.”

“I still need time because I didn’t play for two or three months before coming back. Then I had an injury that kept me out for a while so I need more games. But I’m training hard to get back to full fitness.”

“It is a long time since my last Chelsea goal. When I took the penalty on Tuesday I was smiling because that’s the way I left the club.”

“To start scoring with a penalty again is quite symbolic. And I put it in the same place as I did in Munich (in the 2012 Champions League final). I’m a striker and, even if I am making assists and making space for others, it is good to score.”

The league clash between Chelsea and United will be Louis van Gaal’s first big match since taking charge at Old Trafford earlier in the summer. The Blues are unbeaten in the league and now sit on top of the Premier League table.