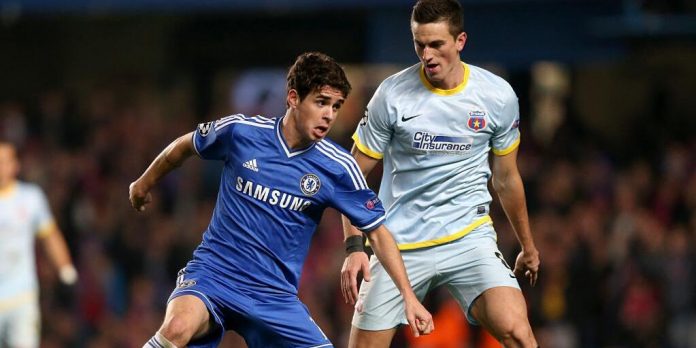 Chelsea secured top spot in Group E on Wednesday, with a scrappy Demba Ba goal earning the Blues a 1-0 win over Steaua Bucharest at Stamford Bridge.

The Blues dominated a toothless Steaua for long periods of the game, and despite an unconvincing scoreline, were well worth the three points.

Chelsea’s attacking midfield sparkled throughout, with the recalled Willian particularly impressive. Spraying superb balls around and driving hard at the opposition defence, the Brazilian seems to have developed a real understanding with Hazard and Oscar.

Here are the Chelsea Player Ratings:

The veteran keeper made his European debut for the Blues on Wednesday, and was given very little to do by the limited Steaua attack. Showed good technique with a save right at the death.

Didn’t put a foot wrong all game; Chelsea’s ‘Mr Dependable’ had another comfortable evening at right-back.

Returning after an extended spell on the sidelines, David Luiz looked rather bored on Wednesday. Possibly charged with keeping that coveted clean sheet no matter what, Chelsea’s maverick defender had to keep himself shackled during the win.

Commanding and strong, Chelsea’s captain kept the Steaua forward line at bay with relative ease, on a very successful night for the Blues.

Cole played a few odd passes to begin with, as he eased himself back into the swing of things after time out of the first XI. But he was a powerful, willing outlet on the left; and Blues fans will be happy to see him complete the 90 minutes.

Poor from the defensive midfielder. Mikel was dispossessed far too often in dangerous areas, and was very slow with his distribution.

Not the best showing from the veteran. Lampard blazed over the bar on multiple occasions, and was a little too wayward with his long balls.

A superb outing for the diminutive Brazilian. Although not getting on the score-sheet, Willian absolutely terrorised a flailing Steaua defence with his stunning turn of pace, and penetrative style. Must be pushing for a regular starting berth at the Bridge now.

Oscar had a decent return to the Chelsea setup after injury, showing good vision and tenacity when under pressure. Also grabbed an assist for the goal.

Not as destructive as in recent weeks, the Belgian winger still showed great touches, linked up well with his attacking midfield colleagues, and glided through Steaua challenges with ease.

The Senegalese did very little to placate the growing strikers crisis at the Bridge, despite scoring the winning goal. Missed hatful of opportunities provided for him by the vibrant trio of attacking mids; Ba had no killer instinct, and must improve his movement.