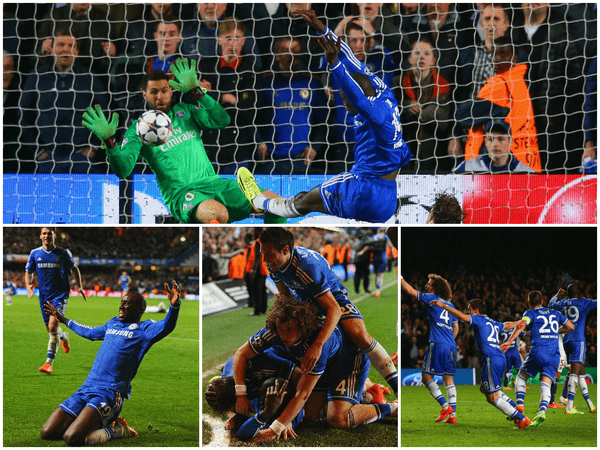 Jose Mourinho ignited fond memories of his touchline sprint ten years ago. Stamford Bridge erupted in delirium. Chelsea were through, thanks hugely to their refusal to give in and keep going.

Demba Ba, criticized incorrectly at times season, guided home Eto’o’s deflected strike. He roared towards to corner flag before his jubilant colleagues piled on top of him.

The Blues had persevered. After going ahead through Schurrle in the first-half, under Mourinho’s wizardry experience, they did not panic. The hosts were given a scare at times, most notably from Cavani’s horribly wayward volley late on and Cech’s excellent save from Maxwell in the dying seconds. Typical Chelsea, fighting to the end. The spirit of 2012 lives on.

Here are the Chelsea player ratings from a memorable evening at Stamford Bridge:

Without him, PSG would be preparing for a star-studded semi-final date.

His handling from hostile set-pieces was excellent. On an evening in which the slightest error could have huge ramifications, the Czech keeper excelled. His save in the dying seconds, just as referee Pedro Procenca proceeded to signal full-time, from Maxwell was spectacular. Thibaut Courtois will have to fight for the number one jersey – Cech is yet a formidable keeper.

The Serb endured difficult moments trying to stifle the threat posed by Ezequiel Lavezzi but when the Argentinian departed with twenty minutes remaining, Ivanovic strode forward much more frequently to provide another attacking option as the Blues searched for the decisive goal. Will miss semi-final first-leg with suspension.

Fantastic alongside John Terry. Managed Edinson Cavani well and was commonly intercepting wayward pass and driving forward to spark offensive passages of play. Should have scored during the first-half also.

Did not pose an attacking threat like his centre-half colleague did but succeeded in his main objective – denying PSG a hugely detrimental away goal.

The ageing Chelsea legend rolled back the years to produce an inspired performance. He surged forward frequently and with his perilous yellow card taken into account, the England midfielder was replaced for Ba, the eventual hero.

The Brazilian’s energy, desire and quality was pivotal in this deserved victory. He roamed around the final third, kept moves ticking as the clock wore down and was a general nuisance to the French champions.

Lively and a creative spark in Mourinho’s side. Unfortunate not to have scored with a spectacular free-kick as the Blues chased the hugely significant goal.

Hardly had any time in which to impose himself on the game. Hauled off after 15 minutes with a hamstring injury.

Returned rather unexpectedly to the starting line-up after a hamstring injury but was on the fringes of the action here.

The German was introduced after 15 minutes as Hazard hobbles off. Many thought it was a big blow but yet, Schurrle was fantastic and wonderfully vivacious. Took his goal well and unfortunate not to have scored a second with a thunderous volley which rocked the crossbar.

Despite being used sparingly by Mourinho, the Senegalese striker took his rare opportunity spectacularly. His goal came from his brilliant anticipation and his finish was composed.

Under-fire striker came on with ten minutes remaining and was effective. Tracked back, dispossessed Maxwell late on and display some good footwork.