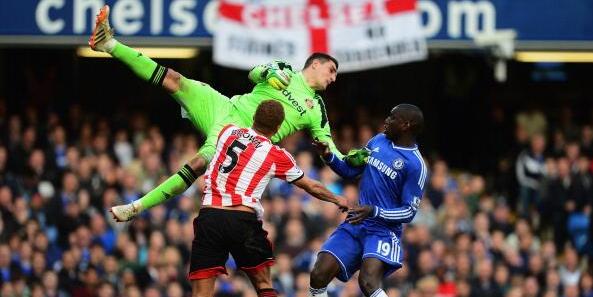 Sunderland dealt a massive blow to Chelsea’s Premier League title hopes as the Black Cats grabbed a shock 2-1 win at Stamford Bridge in the late kickoff encounter on Saturday. Samuel Eto’o had earlier given the home side an early lead before Connor Wickham pounced on a Mark Schwarzer to restore parity. 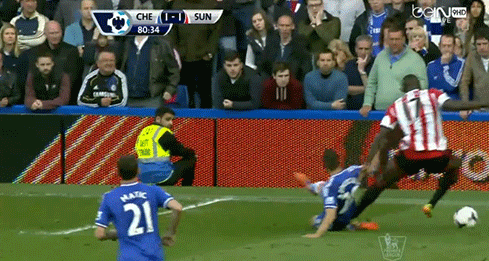 It was then on loan Liverpool striker Fabio Borini who scored from a late penalty to bring down curtains to Jose Mourinho’s 78 games unbeaten at home.

Here are the Chelsea player ratings from Stamford Bridge

The 41 yer old played in first Premier League game replacing Petr Cech, who was down with a virus. The Australian spilled an easy grab to gift Wickham Sunderland’s equaliser.

Displayed great enthusiasm but crossing was well off the mark

Was a reliable presence at the heart of the defense winning almost all his aerial duels but looked vulnerable against Sunderland’s pace later on.

Was calm and composed at the back and could do little with both of Sunderland’s goals.

Slipped to give the ball away to Jozy Altidore and conceded a soft penalty bringing down the American in what would the deciding factor in this season’s title race.

The Serbian pulled the strings in midfield for his team working tirelessly in the middle of the park. Had two of his shots blocked by Mannone in the second half.

The Brazilian had a shocker with his imagination looking at best pedestrian. Should have been sent off for elbowing Larsson right in his face.

Tried to enforce the pace by taking on the Sunderland defenders but the Egyptian wan’t helped by team mates up front.

Lacked his sharpness which makes such a vital player for the Blues. Hardly made an impact before being replaced in the hour mark.

The Cameroonian opened the scoring but looked anonymous ever since.