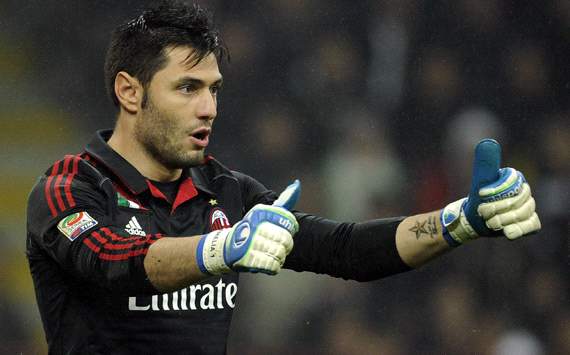 Chelsea are keen to sign a goalkeeper right now and have offered a trial to free agent, Marco Amelia.

The former AC Milan keeper is a free agent and Jose Mourinho is keen to sign him as a back up to Asmir Begovic.

Amelia has represented his country in the past and played for the prestigious Milan club. However, the keeper finds himself without a club at the moment.

After the injury to Thibaut Courtois, Mourinho is worried that another injury (to Begovic) could land his side in trouble, and is therefore keen to snap up the free agent.

Telegraph claim that Jose Mourinho is unwilling to wait until January for a keeper and wants to sign Amelia right now.

“We need a goalkeeper now, not in January,” said Mourinho.

Linked with a move for Porto keeper, Helton, Mourinho responded that the Porto player is not a target.

“Helton has a contract with Porto and would only be available in January. Then Courtois will be available.”

Amelia was previously linked with a move to Arsenal as a replacement for Ospina. However, the transfer never quite materialized and it seems the Italian might end up playing for their arch rivals, Chelsea.